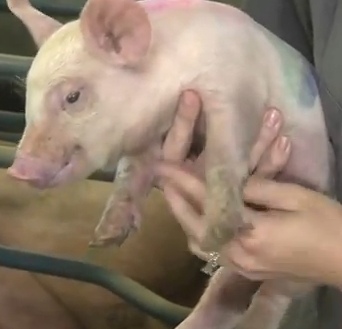 One big debate in the animal welfare world right now is whether the predominant method of housing pregnant pigs in individual maternity pens (also called gestation stalls) is a humane practice.  The American Veterinary Medical Association and the American Association of Swine Veterinarians both find that housing sows individually is acceptable, but that hasn’t stopped animal rights activists like PETA and the Humane Society of the U.S. from launching campaigns against the stalls. Of course, HSUS and PETA don’t believe in raising animals for food and push veganism, but given the public nature of the campaign it’s worth getting an unbiased view and clearing the air.

We recently traveled to Minnesota to interview swine veterinarian Laura Dalquist, who works with sows for a living. We also interviewed animal scientist Janeen Salak-Johnson, an associate professor at the University of Illinois at Champaign-Urbana.

Watch the video to see what they had to say:

These are the true experts. How many on HSUS's executive staff are swine experts or even veterinarians? Zero. Nada. Zilch. Not a single one.

HSUS is a specialist at propaganda, even if it comes at the expense of animal welfare (the group sow housing HSUS wants will result in more stress and fighting injuries for the animals). HSUS preys on urban and suburban folks who are far removed from the farm and farm animals. Essentially, the animal-rights message is to get people to think of food animals the same way they think of companion animals. But they’re different in major ways. You can debate whether life imitates art, but pigs will never be “Babe.”

This is just a taste of things to come. We’ve spoken to many swine veterinarians who are tired of the animal-rights misinformation campaigns. Check back soon for more on this front.