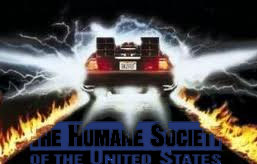 Most people are discouraged to learn that the “Humane Society” of the United States gives a minuscule fraction of its income to actual pet shelters.

Well, here’s some more bad news: HSUS has a long history of financial mismanagement. And we have some insider documents from a former HSUS Board member that put one set of sticky situations in perspective.

Let's go back to the (HSUS) future, shall we?

Wouldn’t it be nice if your employer bought you a $310,000 house to live in, rent-free? Or if you could buy a vacation plot up in Maine, and your office would simply reimburse you? Or if the organization you worked for maintained a little “shell” corporation to funnel extra cash to you on the sly?

And wouldn’t it be nice if you could get away with this without anyone complaining?

These aren’t the kind of perks that the rest of us get. But then, the rest of us don’t work at HSUS. A scandal in the late 1980s tore apart HSUS’s governing Board. It concerned insider wheeling-and-dealing between HSUS’s President, Treasurer (a man who would later become President), and a special Board “Committee” whose collective hands were buried deep in the financial cookie jar.

“Exhibit A” is a 1988 Report prepared by Washington, DC attorney Gail Harmon.

In 1983, HSUS’s Board formed a “Deferred Compensation Committee,” made up of a handful of members. It was empowered to act in the Board’s absence in some matters, especially the establishment of retirement benefits for HSUS bigwigs.

Four or five years later, some Board members found out that this Committee had been allowing then-HSUS president John Hoyt and then-treasurer Paul Irwin to get away with some outrageous practices. Several of them, who weren’t part of that Deferred Compensation Committee, called for an investigation.

The fight was on. These “dissident” board members hired Gail Harmon, Esq. to look into the matter and render a professional legal opinion. Harmon ultimately calculated that HSUS faced serious legal liabilities.

Why? With the blessing of the Deferred Compensation Committee, HSUS bought Hoyt’s house from him in 1987 and allowed him to continue living there rent-free. (Harmon calculated that Hoyt made $222,000 on the sale of his home to HSUS.) By itself, that’s OK—but it’s a taxable benefit. And it appears Hoyt wasn’t paying what he should have.

Irwin, as HSUS’s treasurer, determined that Hoyt should be taxed on a rental benefit of $600/month for living rent-free. Irwin wrote that the $600 figure was the “absolute minimum amount which Mr. Hoyt could legitimately defend with the IRS.” But it turns out that $600 was far less than the fair price. HSUS's own accountants put the fair market value at $1,200 per month, or twice what Hoyt was paying taxes on. And the Harmon Report arrived at an even larger figure—$2,500 to $3,000 per month—based on a local realtor’s estimate.

Also at issue was why Hoyt was collecting money from a defunct shell corporation owned by HSUS. It was called the National Humane Education Center (NHEC), and it hadn’t been active since the 1970s, but a bank account was opened in 1984 and money flowed through it. (Hoyt’s compensation was supposed to be fully disclosed on HSUS’s “Form 990” tax filings with the IRS.) The money funneled from HSUS—through NHEC—to Hoyt never showed up on those tax forms. The IRS has a name for this: Perjury. (In Harmon’s words, HSUS used NHEC “as a conduit … in order to avoid disclosing this compensation.”)

How much dough was Hoyt pulling in through NHEC? Harmon discovered that he got an extra $55,000 over a four-year period. (That amount was larger than the four-year average per capita income in the ’80s.) On top of that, Hoyt was receiving other perks like life insurance, a travel allowance, more deferred compensation, and that rent-free house.

Right next to Hoyt on the gravy train was treasurer Paul Irwin, who took over HSUS after Hoyt left. (Irwin would later leave HSUS to lead the American Bible Society—until it emerged that he had hired an Internet pornography kingpin to build fundraising websites for both organizations.)

Like Hoyt, Irwin was receiving lots of added benefits on top of his HSUS salary. He received money funneled through NHEC, as well as $10,000 funneled through the National Association for Humane and Environmental Education (NAHEE, another HSUS-controlled front group that was later renamed “Humane Society Youth”). Irwin’s 1988 salary was $80,000, but it grew to nearly $108,000 with all these extras.

Irwin was also involved with his own real-estate scandal. After he invested in a vacation home property in Brightwater, Maine, HSUS decided to “reimburse” him some $85,000 for the property. (Hoyt signed the checks.) Investigating, Harmon determined that because HSUS didn’t then have any legal interest in the property, Irwin should have paid taxes on this windfall. (He didn’t.)

If you were a board member of a massive nonprofit group, and you suddenly found out about all of this stuff—months or years later—wouldn’t you be shocked? Hoyt, Irwin, and some HSUS Board members insisted that the “Deferred Compensation Committee” formed by the Board in 1983 was vested with the power to move money to HSUS employees however it pleased. Harmon ultimately did not find this argument convincing.

HSUS eventually divested itself of the two properties, but Hoyt stayed on as president—even after the financial shenanigans attracted the attention of the late Washington Post investigative journalist Jack Anderson. Irwin took over after Hoyt retired. After Irwin came Wayne Pacelle (who was still in college when the whole mess started to unravel), and the rest is history.

None of this—absolutely none of it—was referenced in John Hoyt's 1988 "HSUS Report of the President."

One of those courageous few Board members has shared all the relevant documents with HumaneWatch, including the damning Harmon & Weiss report from 1988. Stay tuned in the coming weeks as we unveil more.