When most Americans think of Washington, DC, the word “lobbyist” has a habit of arousing suspicion more than other terms of political art.

Anyone who has paid even cursory attention to the Humane Society of the United States is probably aware that the organization is flush with lobbyists. And new records from the State of Missouri show that HSUS president Wayne Pacelle is personally signed up to lobby there. 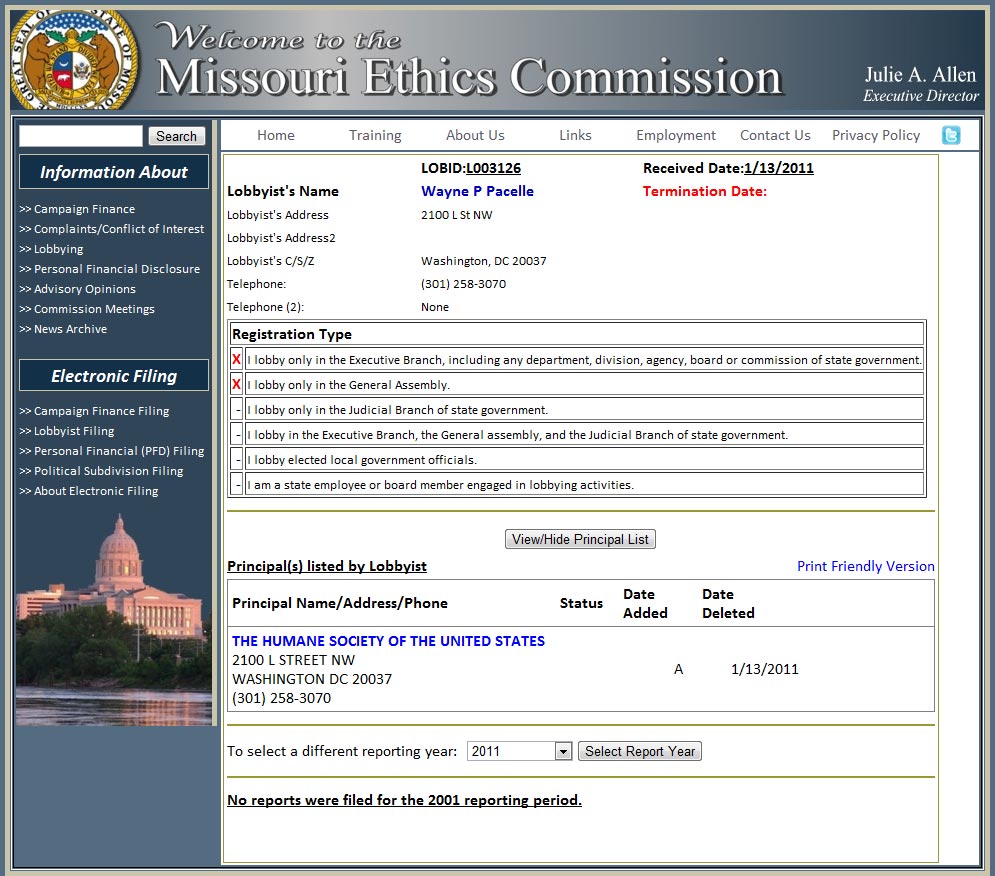 The context in which Pacelle is now openly wearing his lobbyist hat tells a fascinating story.

First, Wayne Pacelle is not HSUS’s only paid lobbyist in Missouri: The Missouri Ethics Commission already lists four paid HSUS lobbyists for 2011, two at each of two HSUS street addresses.  (We’re working to identify all of HSUS’s paid lobbyists in the United States for a future article.)

Second, HSUS’s founding document plainly forbids lobbying, saying that “No substantial part of the activities of the corporation shall consist of the carrying on of propoganda [sic] or otherwise attempting to influence legislation.” Surely the activities of HSUS’s chief executive are a “substantial part” of whatever the organization is up to on any given day.

Third, most professional lobbyists have clients who pay them (with eyes wide open) for a specific result. HSUS’s lobbyists, on the other hand, are paid by unsuspecting HSUS donors, most of whom incorrectly think their contributions are trickling down to the real Humane Societies and other pet shelters in their communities.

So why is Wayne Pacelle lobbying when his organization already has its share of hired guns? And why in Missouri?

In the 2010 election, Missouri voters passed “Proposition B,” a measure intended to make it more difficult (and more expensive) to breed dogs for profit. Prop B supersedes a 1992 Missouri animal welfare law and, among other things, guarantees breeding dogs “unfettered” access to the outdoors.

More controversially, it set a limit (at 50) of the number of female dogs over 6 months of age that could be kept by any breeder. Voters approved the law by an uncharacteristically narrow margin—HSUS is accustomed to winning at least two-thirds of the vote—and with the support of only a handful of urban, populous counties.

HSUS was roundly criticized for pouring out-of-state money into Missouri politics, and for carpetbagging its way to control over rural voters in the Show Me State. So it surprised practically nobody when lawmakers organized a repeal effort as soon as the legislative session opened this month.

One of the more interesting proposals to re-work Prop B came in the form of a bill that would extend its provisions to every facility in the state that housed 10 or more dogs. That would mean animal shelters and pet rescues would be subject to it too. They couldn’t have more than 50 female dogs over 6 months of age, and they would be required to let the animals have outside access.

The logic behind this is simple and compelling: If a breeder’s dog needs elbow room and room to roam outdoors, so do dogs in shelters. And if a 50-dog limit is silly and burdensome for a shelter whose large staff can easily handle caring for 100 or more animals, the same can be said of a breeder’s kennel if it has enough employees.

There were several hearings in Jefferson City last week [news stories: 1 | 2 | 3 | 4 | 5 ] on several suggestions for resolving the Prop B impasse. Some called for total repeal. Others would call for codifying a mixture of Prop B, the 1992 law, and some added common-sense backstops.

Pacelle, the newly minted lobbyist, was on hand to twist as many arms as he could, while insisting that no one even think about compromising. Missouri’s farmers and ranchers, on the other hand, seem equally adamant that Prop B should be scrapped. They fear an overly broad definition of a “pet” in the law could subject cows, pigs, and chickens to its restrictions.

And dog breeders? According to one small-scale cow/calf rancher, the principle of unintended consequences is alive and well in Missouri, and her neighbors who operate kennels are already going out of business. And that leaves a pretty big unanswered question:

Since Prop. B passed some 400 breeders have quit. Question is where are their dogs? No one is saying. My guess is a lot of them were put down. This will continue throughout 2011 until there are very few licensed breeders left. Did you really think that it would not happen?

Or perhaps these consequences were very much intended. Maybe that’s why HSUS’s CEO dispatched the group’s über-lobbyist—himself—to try and prevent the law from being neutered.

Over at the KC Dog Blog, Brent Toellner argues that Wayne Pacelle’s new “lobbyist” status “seems odd for the CEO of a 501c3.” (HSUS is legally a nonprofit.) He’s right. It’s not unprecedented, to be sure—501(c)(3) groups are allowed to do a little bit of lobbying—but it doesn’t pass the smell test.