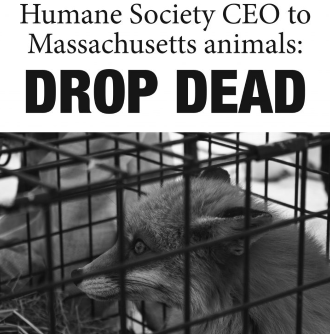 According to its newly released tax return, the Humane Society of the United States (HSUS) spent nearly $70 million on fundraising last year, had $30 million offshore in the Caribbean, and paid 67 staffers over $100,000 in compensation.

Yet, now word has come to us that HSUS is too cheap to continue operating several of its hands-on animal care centers across the country.

HSUS is unaffiliated with the many local humane societies that operate pet shelters, despite common belief to the contrary. But HSUS does run a handful of animal care centers: Black Beauty Ranch in Texas, the South Florida Wildlife Center, and Duchess Sanctuary in Oregon. We have been informed by sources that HSUS will be closing all three. This winding down is expected to occur over the next year.

The decision to close more animal care centers indicates that HSUS is in financial trouble, and that its real priority is in politics and pushing veganism on others. 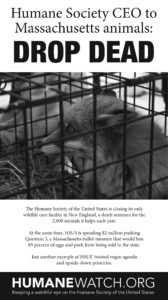 Readers may recall that HSUS announced in October 2016 that it was closing its Cape Wildlife Center in Massachusetts, which cared for injured wildlife. At the time, HSUS cited budgetary struggles. Yet, at that very same time HSUS was spending over $2 million funding a political ballot measure in Massachusetts to ban the sale of non-cage-free eggs and pork by 2022 (which is most eggs and pork produced in the US). That was apparently more than the annual budget of the wildlife center.

In other words, the big cheeses at HSUS decided they would rather spend money on politics—specifically, trying to restrict what people can buy at the grocery store—than on caring for animals. The CEO of HSUS and a number of other HSUS leaders used to work at PETA and are opposed to the use of animals for food.

The planned closures of animal care centers also comes as new tax documents reveal HSUS financial struggles. According to its Form 990 tax return, HSUS spent almost half of its budget in 2018—about $68 million—on fundraising-related expenses. HSUS is a veritable “factory fundraising” operation, and that figure will no doubt secure HSUS another “D” grade from CharityWatch. We’ll have more analysis in a separate blog.

The return also shows big payments to executives. Michael Markarian, who left in summer 2018, was paid over $300,000. CEO Wayne Pacelle, who resigned just one month into 2018 after he was accused of serial sexual harassment, was paid over $200,000. Andrew Rowan, the chief information officer, was paid over $445,000.

If there are two choices—funding animal care centers, or spending money on politics and corporate bloat—HSUS leadership has clearly chosen the latter.

Local activists were able to raise $1.7 million to save the Cape Wildlife Center, according to media reports, with no apparent thanks to HSUS. That’s one reason we encourage people to “give local” if they really want to help animals. Your money is much less likely to fund lobbyists, lawyers, and executives with six-figure salaries.