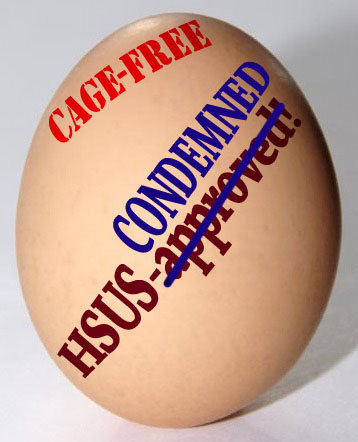 We get asked a lot of questions, but the one we get asked the most goes something like this: "We all kinda sense that HSUS is moving in the same direction as PETA regarding animal agriculture, but can you prove it?"

The answer usually sounds like this: The proof is in the pudding. HSUS clearly believes that some animal-ag practices are superior to others, but ask yourself this: Have you ever seen the group's leadership actually endorse (much less consume) any kind of meat, egg, or dairy food?

It's a question worth asking. In fact, we asked it in a Congressional hearing a few years ago, while Wayne Pacelle and we were sitting (both literally and figuratively) at opposite ends of a long table. It seems to us that if there is such a thing as "humane meat," Wayne Pacelle and Paul Shapiro and all their underlings ought to be ordering it for the office Christmas party. Or at least putting their corporate logo on it in the grocery store. (The idea of "humane" meat, of course, suggests that all the rest is "inhumane." We're not down with that, but it seems like HSUS is.)

Would they ever do it? We had an interesting chance to find out a few years ago when a "cage-free" egg company put out a press release. And then retracted it.

Here's what happened. On March 31, 2008 a company called "Eggology" issued a press release. We noticed this one because it suggested the impossible:

Yes, you read that right. Eggology declared two years ago that it was the "First Egg Products Brand … Endorsed By The Humane Society Of The United States." The press release even included a quote from HSUS's Paul Shapiro. It almost seemed like a legitimate course-correction for HSUS.

For about two hours, anyway. That's apparently how long it took for the feathers to fly, and for Eggology to issue a "corrected" release, sans HSUS endorsement, and minus the Shapiro quote:

Eggology, the leader in the all-natural egg whites industry, has become the only liquid egg brand to be "Certified Humane" by Virginia-based animal welfare auditing organization, Humane Farm Animal Care.

Now, we don't know if the Eggology people truly misunderstood HSUS's position on eggs, or if maybe its PR people just got HSUS confused with the "Certified Humane" labeling scheme. (Confusion would be forgivable, since HSUS co-founded the "Humane Farm Animal Care" organization that runs that eco-label program.)

But this much is quite clear: HSUS was not happy with the public perception that it had endorsed an animal protein product. Not even egg whites from "cage-free" layer hens. Eggology was mightily embarrassed (we won't jump to the obvious "egg" cliché here…) to have to retract a press release. There's no way the company did it without some serious prompting from HSUS.

Oh, and by the way—to our knowledge, there's exactly one food product that carries HSUS's endorsement (and its logo): Tofurky.

But the larger point is this: While Eggology was retracting its press release in 2008, HSUS was spending millions of dollars to force every California egg farmer to move in the direction of "cage-free" production. HSUS is trying to push the same program in Ohio this year. It's already succeeded in several other states. If 100 percent cage-free production were really HSUS's final goal for eggs, don't you think the group would endorse its most outspoken practitioner? Don't you think someone from the HSUS head office would … you know, eat a few of those eggs?

They don't. They won't. And they're free to make their choices. But while everyone is thinking that a federal law restricting cages in egg production would be a Touchdown for HSUS, the animal rights group understands that it's really just a First Down. They'll keep moving the chains, and they'll have all the momentum for the next few plays. (Not to torture this metaphor too much, but the touchdown is a vegan United States. And these people don't kick field goals.)

We would love to see a reporter or three pin Shapiro and Pacelle down on this:

The questions kinda write themselves, but only after you understand what's going on.