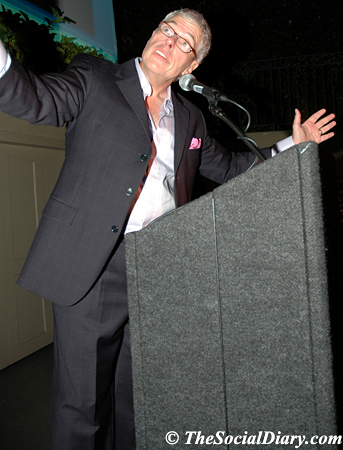 Pity poor Jerry Cesak. The once-bright San Diego radio host has been reduced to “broadcasting” on the Internet, but at least he’s got his love for animals, right? Last week “Little Tommy,” one of the characters on his show, blogged about the newest Board member of the Humane Society of the United States:

Jerry is on this earth to protect animals.  In his home, he’s obviously a vegetarian, so there isn’t anything with meat in his refrigerator or in his pantry and you will not find a leather shoe or piece of furniture made from any animal.   Jerry has a fleet of cars and none of them have leather interiors.   Jerry will wear a 5 thousand dollar suit, but when you look down at his shoes, he’s wearing cheap almost plastic shoes—-no leather.

The odd thing about Little Tommy’s essay, though, is that it ended by noting that “Jerry shared a letter he wrote to all his close friends.” And there was a link to that essay.

But now both the link, and Cesak’s entire essay, are gone. Deleted. Zapped. But don’t worry: We have a copy.

Included in the long list of [Wayne Pacelle’s] remarkable accomplishments: HSUS membership has more than doubled to 11 million. That’s 33% of America.

Read that again. Not only does HSUS not have anywhere near 11 million members, but 11 million is definitely not one-third of the American population. It's not even one-third of California.

Wayne sure can pick 'em.

For the record, the U.S. population is just a tad over 307 million. HSUS’s unrealistic “11 million” number—even if it were true—would represent less than 3.6 percent of the total.

And since we know HSUS’s real membership number is closer to 450,000 (that’s how many copies of its membership magazine are printed every other month), the real percentage of Americans who are HSUS members is—drum roll, please—one-seventh of one percent, or 0.1466% for you mathletes out there. (Not you, Jerry.)

The Humane Society of the United States has made some truly boneheaded mistakes since Wayne Pacelle took over. Its weak response after Hurrican Katrina comes to mind, as well as its lack of any meaningful response after the Gulf of Mexico oil spill. And, of course, there’s the Michael Vick fiasco.

But putting Jerry Cesak on the Board could rank right up there with the biggest reputation-destroying moments of idiocy in HSUS’s history.

Here’s the meat of Jerry Cesak’s essay. (We read it so you don't have to.) It was originally dated October 24, 2010, and purged—almost!—from the Internet a few days later.

I have something here that’s pretty huge. (…that’s what she said…)

The President and CEO of HSUS is Wayne Pacelle … In addition to being a dear friend, Wayne is one of my very few heroes.

Under Wayne’s innovative guidance and wisdom, HSUS has become the most influential, most effectual animal protection organization in the world. Included in the long list of his remarkable accomplishments: HSUS membership has more than doubled to 11 million. That’s 33% of America.

It was a stunning experience to wake up this morning and say to myself, “My God. I’m on the Board of Directors of the Humane Society of the United States”. I know you’ll understand when I tell you that now – someday it will be OK with me to die …

So there’s the big news around our house today. I know this was kinda long. (…that’s what she said…) Thanks for slogging through it.

And yes, you may treat me to a Karl Strauss Amber Lager. Or twelve.

You stay classy, Jerry! Your copy of Math for Dummies is on its way.

And don’t worry, Wayne. You can replace him in three years (if you still have a job).