No Lamb Vindaloo For This Guy - HumaneWatch 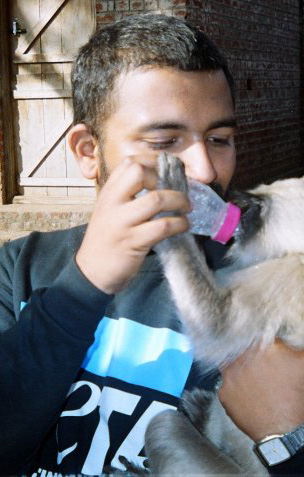 Although this is not a website about People for the Ethical Treatment of Animals, there are a few prominent HSUS staffers who cut their teeth at PETA.

What's that? It's a scheme that has HSUS using the public's contributions to buy up shares of stock in companies it opposes. Why? So HSUS's "experts" have the right to speak at the annual shareholder meeting, of course—and propose new policies that drive up the cost of producing meat, or selling chicken sandwiches, or serving eggs over easy. Prescott had the same exact job at PETA until last year.

Now there’s another PETA alumnus in the HSUS fold. Meet Jayasimha “N.G.” Nuggehalli. That's him in the PETA sweatshirt.

Jayasimha is a former PETA India campaign manager (and legal coordinator) who became a campaign manager with Humane Society International (HSUS’s global arm) late last year. At HSI, he's been pushing for cage-free egg production. (Yep, HSUS does that in foreign countries, too.)

And he's not exactly from the Wayne Pacelle "hide the ball" school of public communications. Nope. This guy is actually not afraid to be honest about his goals. This is from his Facebook page:

I am an Animal Rights Activist dedicated to effectively allocate resources (time and money) to end the "property" status of nonhuman animals and abolish institutionalized animal exploitation because it assumes that animals are property.

Jayasimha was arrested with PETA co-founder Ingrid Newkirk in Chennai, India in January 2008 for "blindfolding" a statue of Gandhi. Later that year Newkirk described him as “one of the great movers and shakers in PETA India.” Jayasimha also believes that eating meat “means eating the corpse of a tortured animal who did not want to die.”

If that weren't enough, he calls the book Eternal Treblinka, which compares ordinary animal use with the Nazi Holocaust, “the greatest gift one could give to the animal rights movement.”

Here’s my question: Why would an upwardly mobile PETA staffer whose goal is to “end the ‘property’ status of nonhuman animals” ditch his job and join HSUS’s global arm?

Scratch that question. Too obvious. What we really want to know is why he hasn't been fired yet. You know—for going around every day with his PETA showing.