"Not Your Local Humane Society": a 50-state report - HumaneWatch 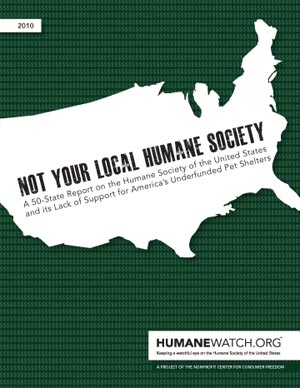 Today we're releasing a report showing just how much (or, if you prefer, how little) of the millions of dollars poured into the Humane Society of the United States each year reaches local pet shelters in all 50 states.

It's called "Not Your Local Humane Society," and it includes some eye-opening statistics about how HSUS fails to put pet-sheltering dollars to work in the local communities where the money originates.

Download "Not Your Local Humane Society" and see how HSUS performed in your state. The report includes a complete accounting of every pet-shelter grant the organization made from 2006 to 2008. We'll be updating it later this year when HSUS files its 2009 income tax return.