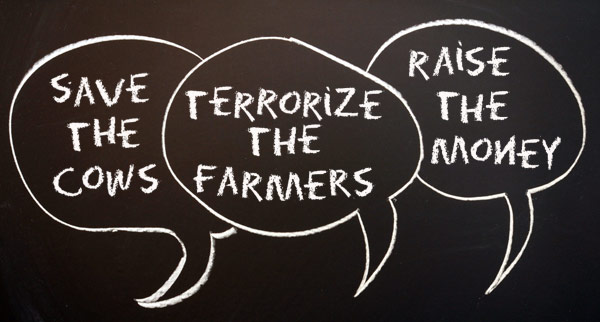 This morning the HumaneWatch blog received a comment from an unusual visitor: David Phillips, the Prosecuting Attorney for Union County, Ohio.

Union County, you’ll remember, was the site of a recent animal rights controversy that erupted after Billy Jo Gregg, a lone dairy farm employee, physically abused several animals while an undercover activist from Mercy For Animals (MFA) passively watched and videotaped. (The Humane Society of the United States claimed it didn't have a clue about this "investigation," but it quickly and cheerfully promoted the result.)

Gregg remains behind bars and faces several serious criminal charges (as he should). But Phillips has been left with the unenviable task of cleaning up the legal mess that Gregg left in his wake.

Last week a Grand Jury refused to indict Gary Conklin, the owner of that dairy farm, even though he was pictured on the heavily edited video that made the rounds online and on television. The Grand Jurors apparently understood that while Conklin was aggressive with one particular cow, he was trying to save its life by forcing it to stand up after giving birth.

Phillips told reporters that the “edited” video released on YouTube was spliced together in a way that “creates a perception that Gary Conklin knew or participated in” Gregg’s blatant and sadistic animal abuse.

None of this has stopped animal rights groups from continuing to call for Conklin’s head on a platter. (He made the mistake of hiring Gregg, after all.) And that’s where Phillips comes back into the story. Here’s what he wrote today:

We continue to get hundreds of e-mails from activists around the world making demands that I prosecute Mr. Conklin or resign.  They ignore (or don’t know) that the MFA investigator told law enforcement that Conklin did not abuse the animals, nor did he know of Gregg’s actions. The MFA investigator did not tell Conklin about the abuse.

Regarding Gregg being a “plant,” we did investigate that possibility.

I remain concerned about the threats against the Conklin family ranging from murder to tearing the farm down.

We’ve seen evidence of some of these threats as well, mostly coming from Facebook groups that serve as meeting places for activists who may be every bit as unstable as Billy Jo Gregg. Here’s hoping Mr. Phillips has the resources (and the courage) to deal appropriately with all the players in this game, including those issuing the death threats.