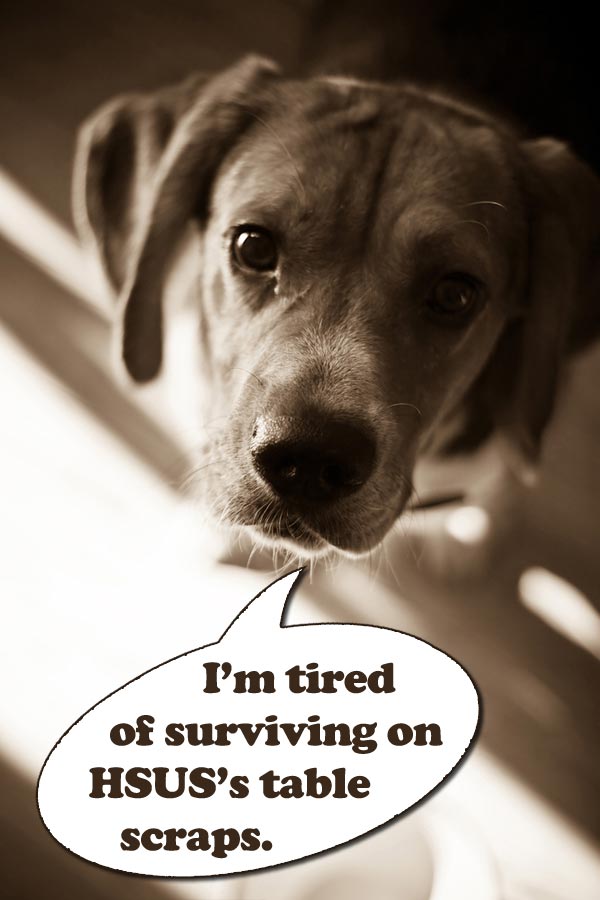 The relationship between the super-rich Humane Society of the United States and the thousands of (often very poor) U.S. pet shelters is the stuff of legend in the animal rights movement. We’ve heard stories about HSUS using its checkbook as both carrot and stick, and a large number of pet sheltering professionals—the folks who do all the heavy lifting—have come to resent it.

One such shelter director from the American Midwest wrote us on Friday, daring to pour her frustrations into her keyboard.

We’re sharing this letter with her permission, but without her name.

As a small shelter we bear the name "Humane Society" as the [name withheld] Humane Society. People automatically think we get some of these funds when we do not. We have had our name for over 20 years. We are not able to speak out vocally as we would like, but I do find some very eye opening things on your site. We have never received a penny from HSUS and we dealt with some issues with them during a flood.

I do not want to speak publicly but would like to commend you for some of your insights. You can publish the email if I am not identified. That is why I finally wrote you.

We struggle as a Humane Society and people think we get big dollars. We get nothing, not even food, vaccinations, heartworm tests, nothing. It is frustrating. I guess you can understand why I do not want to be identified. I am even afraid to "like" you on Facebook for retaliation.

Retaliation? It’s clear to most observers that HSUS runs a very small network of “preferred” shelters that it favors with glowing media attention and cash donations. But it’s harder to imagine what “retaliation” against dissident puppy and kitten caregivers might consist of.

Perhaps this shelter director is concerned about reputation-ruining negative press. Or a phonied-up law enforcement raid, supervised by HSUS itself. Or any number of other distractions that could focus her attention somewhere other than adopting out dogs and cats. Whatever her concerns are, we’ll keep her identity a secret. And if any of her colleagues out there want to follow suit, you know where to reach us.