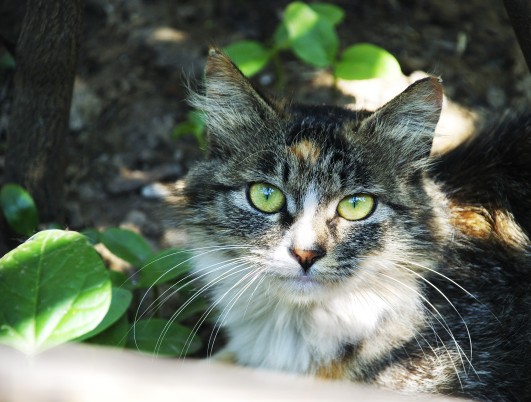 The New York Times recently reported on its website that researchers in Georgia developed a project in which mini cameras were attached to house cats in order to track what outdoor felines prefer to do with their time. Those that hunt (slightly less than half) mostly kill reptiles, in case you’re curious, and cats often wind up in dangerous spots. Curiosity and all, we suppose.

The Times called up HSUS for its take, and a spokeswoman pooh-poohed the very idea of outdoor cats:

There are many other reasons to keep cats inside besides harm to wildlife. “Cats are safer, wildlife is safer and communities are safer when cats are indoors,” said Katie Lisnik, the director of cat protection and policy for the Humane Society of the United States.

She said outdoor cats are in danger of being hit by cars, attacked by other animals or contracting diseases. The most humane way to care for cats, she said, is to keep them inside in a stimulating environment “so that they can express their natural behaviors.”

Here in the D.C. area, there are certainly good reasons to keep cats indoors, heavy traffic being a major one. But here’s the irony in HSUS’s advocacy of keeping cats indoors: When farmers move their animals indoors for some of the same reasons, HSUS is up in arms.

Farmers moved animals indoors and into maternity pens or hen cages in part to protect them from the environment, disease, and other (predatory) animals. And it’s scientifically measureable that, for example, egg-laying hens indoors in cages have lower mortality rates and are more protected from predation than those housed outdoors.

However, HSUS doesn’t want hens in cages or pregnant pigs in maternity pens. It has pushed for cage-free systems, which can be indoors. But even this isn’t enough, with HSUS campaigners saying that cage-free is just a “step in the right direction” and “If anyone says ‘cage-free’ is 100 percent humane, 100 percent cruelty-free, just know that that’s not accurate.”

What’s the next step from cage-free? Free-range, which includes outdoor access. It also means, according to the American Veterinary Medical Association’s review of the science, that the hens are exposed to more disease vectors and face a higher risk of being picked off by a predator.

Gee, whiz—aren’t those some of the same risks faced by outdoor cats?

That’s not to knock one animal-farming system in favor of another. Different systems can work if managed properly. But HSUS’s goal with farm animals isn’t so much to maximize animal welfare as it is to “get rid of the entire industry,” to quote a former vice president. Farmers and veterinarians are the ones who know best about animal welfare and are in the best position to make these decisions—not an animal rights group that doesn’t boast a single veterinarian among its executive staff.