Pacelle Has No 'Bond' with American Airlines - HumaneWatch 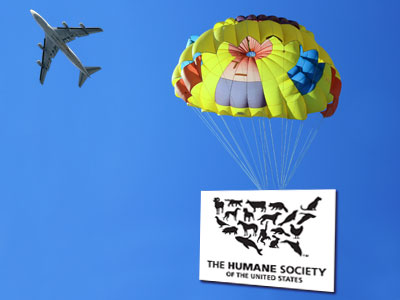 Humane Society of the United States CEO Wayne Pacelle’s new book, The Bond, has already inspired a slew of puff pieces and pat-on-the-back press. Amazon is already deep-discounting the paperweight-class tome, but fawning reporters are doing pretty much what you might expect.

But sometimes even good press can backfire.

American Way, the in-flight magazine of American Airlines, devoted five full pages of its February issue to gushing (read: nauseating) prose about Pacelle, claiming that he has “the confidence of a Kennedy and the type of handsome face that seems perfectly tailored to accent his tailored suit.”

If you’re looking for that article today, however, you won’t find it on the American Way website. The browsable digital version of the February issues now contains five blank pages where the article originally appeared. (We found a scanned copy of the piece here.)

How did this happen? It turns out HSUS’s carefully crafted media image isn’t bulletproof when both sides of the story are heard.

The National Turkey Federation (a trade group for turkey farmers, as you probably guessed) says that after the article appeared, it asked the Animal Agriculture Alliance (another trade group) to write to American Way Executive Editor Adam Pitluk.

The Alliance catalogued its grievances with HSUS, explaining that the animal rights group works “to prohibit the ownership and use of animals in any way—be it for companionship, entertainment, or food,” and that Wayne Pacelle “has learned to exploit the general public’s emotions in order to fund his organization’s political agenda.”

According to the National Turkey Federation, Pitluk “admitted to the Alliance that he was ‘duped’ and should have included both sides of the story. He affirmed that American Way would never feature HSUS or other animal rights groups again.”

It sounds like this well-meaning mile-high editor was shocked—as many Americans are—to learn the full truth about the Humane Society of the United States and its agenda.

A little polite education can go a long way, and HumaneWatch is chock full of curriculum material for your impromptu lessons. Don’t forget to browse our Document Library for the evidence you’ll need. And if you’re not already active in our Facebook community, check it out. You’ll find kindred spirits with a passion for telling the truth about the animal rights movement.