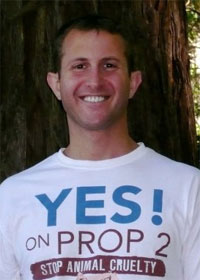 One of the more persistent Humane Society of the United States vegan agitators is going on tour out West. Sort of.

Notes about three different upcoming personal appearances by Paul Shapiro crossed our desks today, and we thought you’d like to be informed. You know, just in case you had a hankerin’ for soft-spoken moralizing with a side of tofu.

Here are links to the events. [ San Diego | Santa Monica | Phoenix ] More about Shapiro’s upcoming schedule after the jump.

Paul Shapiro of the Humane Society of the United States will speak and APRL will provide vegan snacks and refreshments!

Join us as Paul Shapiro, long-time animal rights campaigner, discusses some of the progress being made to combat factory farming and what we can do to continue moving the ball forward for farmed animals.

For the uninitiated, “APRL,” the group promoting this speech, is the Animal Protection and Rescue League. APRL is a strict vegan activist group run by this guy. Enough said.

Join Compassion Over Killing and long-time farm animal campaigner and COK founder, Paul Shapiro (now with the Humane Society of the United States), for a free vegetarian meal and discussion of some of the progress being made to combat factory farming and what we can do to continue moving the ball forward for farm animals.

The event is free and open to the public, plus there will be delicious veg food—so bring a friend!

Homemade vegan (no meat, egg, or dairy) dishes are welcome but not required at this potluck-style event.

You heard it here first: Don’t show up with a tuna casserole to share. Fish are people too, apparently.

Who told these guys it was okay to rename Thanksgiving? And call us old-fashioned, but “seitan turkey breast with vegan giblet gravy” (read the menu here) doesn’t exactly evoke any Norman Rockwell images of Thanksgiving. “ Butter” is in quotes. The pumpkin pie has “soy whip topping.”

All kidding aside, we would never quibble with anyone’s decision to be a vegetarian. (That’s “more steak for the rest of us,” as someone’s grandfather once said.) But can we stop pretending that the Humane Society of the United States isn’t promoting the elimination of animal protein?

If Paul Shapiro wanted to reassure Americans in general—and HumaneWatchers in particular—that he had no plans to veganize us all, he could do it by presiding over a normal Thanksgiving dinner, one whose main course was the most humanely raised turkey on the planet. (Maybe we could find a bird that was accidentally killed by a lightning strike. Or is Mother Nature, too, inhumane?)

Seriously, there’s a growing concern that the nation’s biggest (and, apparently, phoniest) “humane society” is just a front for the sort of nuttiness that once made PETA famous. So why not dispel all those fears? Why not drink a glass of milk from an organic, grass-fed Holstein, with a few cameras rolling? Why not hold a public breakfast once a month at HSUS headquarters, and serve some of those cage-free eggs that HSUS is so good at promoting?

Why not? Well, to be fair, it’s because the leaders of HSUS are vegans. They simply don’t believe that it’s moral or appropriate to eat food that comes from animals.

So be it. If the chief article of faith required for a career at HSUS is meatless eating and milkless drinking, then we say it’s a free country and they should be allowed to practice whatever sort of fringe dietary indulgence they please.

But is it too much to ask that they should be honest about what they want? It’s getting to the point where, in some quarters, veganism has attained the status of a quasi-religious cult. But it’s not one that will ever be wildly popular, or that very many people will join willingly. Hence the need to lead us gradually by the nose with ballot initiatives (like the one advertised on the t-shirt above) and incremental marketplace changes. And where is Shapiro leading us, exactly? To the same place PETA would lead us with its antics, if everyone weren’t already convinced that the whole group is insane. 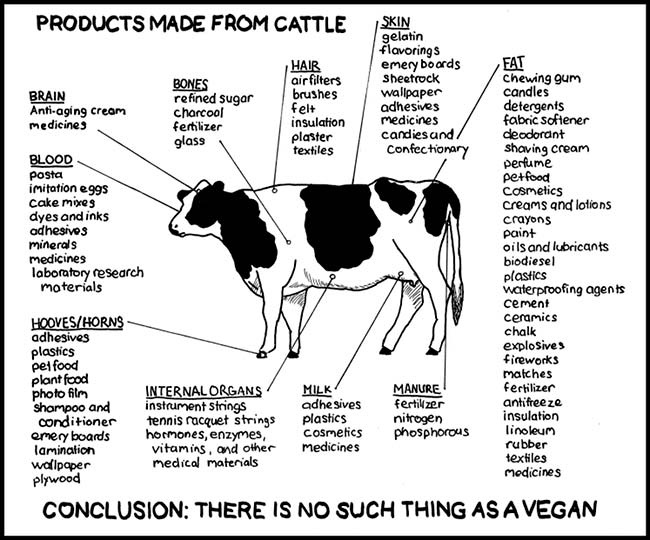 Perhaps we should all be allowed to pick our own poison without too much pushing and shoving. It’s seems the humane thing to do.