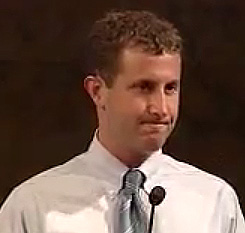 The Humane Society of the United States is fond of promoting the myth that it has 11 million “members and constituents,” or some variation on that theme. In press releases and interviews. we've seen HSUS spokes-vegans make this easily debunked claim in order to wield unearned political clout and craft an Orwellian illusion of enormous mainstream support. Now it looks like they're getting cocky.

The HSUS has about 11 million supporters across the U.S. These are supporters that donate to the organization and they expect that we're going to be fighting for animals not only at the national level but in their communities as well.

Donate? As in, present tense? Like, all in the same year?

We have to hand it to Paul: In a state full of cattle ranchers, he found a way to make his brand of BS stand out.

We've examined this unsupportable “11 million” figure in the past, and determined that HSUS likely had about 420,000 actual members in 2008.

“Constituents,” of course, is a more nebulous term than "members." It could mean current donors, past donors (even donors from the distant past who are no longer alive), website visitors, or farmers who RSVPed for Sunday's "town hall" meeting. It likely includes people like us, who are on their mailing lists but disagree with their agenda.

But the traditional meaning of the word "constituents" is political. Ohio Governor-Elect John Kasich actually has 11 million constituents. HSUS does not.

In any event, if our current estimate of 450,000 actual HSUS members is on the low side of reality, Wayne Pacelle has provided his own number. It, too, is nowhere near 11 million. In a fundraising letter this summer, Pacelle wrote that HSUS’s membership was only 1.2 million.

Now let's go back to Paul Shapiro and the present tense. He said on television that "11 million supporters … donate to the organization [HSUS]." Could this possibly be true? If it is, HSUS's average annual donation is nowhere near "$19 a month." It's less than $9.00. And Wayne Pacelle, whose own stated figure is about 90 percent lower than Shapiro's, is a liar.

Alternatively, it could be Shapiro who was lying. Or perhaps he just misspoke. We hope he'll give us a jingle and straighten this out. (Yes, he has our phone number.)

Maybe while we've got him on the phone, we'll ask for clarification about why the vegan animal rights group he co-founded and managed was fond of glorifying the FBI-designated terrorism of the Animal Liberation Front. And about what it was like to carry anti-meat signs in boistrous PETA protests. And what he was thinking when he climbed atop a McDonald's with an animal-rights banner to try and scuttle the lunch hour.