It’s been a little over two years since the Humane Society of the United States and its activist ally Farm Sanctuary convinced a majority of California voters to deliver a crippling electoral blow to the state's farmers. This year the animal rights groups are targeting the state of Washington with the same outcome in mind: an eggless America.

Animal rights lobbyists from the other Washington—Washington, DC—are managing a campaign committee called “Washingtonians for Humane Farms,” and if you live in the Evergreen State they might be canvassing your neighborhood already. Their short-term goal is to secure at least 241,000 signatures so their “important measure” will appear on the November ballot. 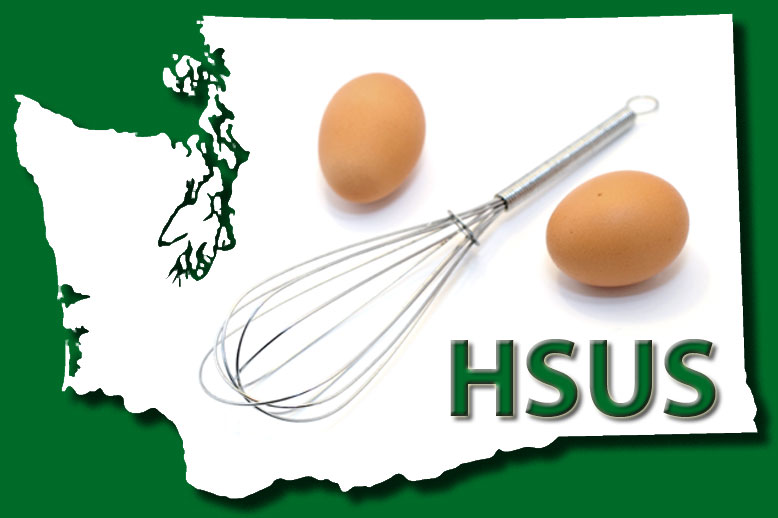 If Washington voters were to approve it, this measure would make it illegal for Washington farmers to raise egg-laying hens in cages. Additionally, regular eggs would be banned from grocery stores. (Unlike in California’s “Proposition 2,” there’s no ambiguity about whether farmers can use “enriched” cages of the type that Temple Grandin and the American Humane Association endorse. They would also be banned.)

Signature-gathering animal rights activists will likely tell voters that the only way to ensure hens lead happy and healthy lives is to force every farmer to go cage-free. Science, however, is anything but clear on the topic.

HSUS's minions may ultimately be doing more harm than good. And yes, they are HSUS's minions: With records current through February 10, Washington's Public Disclosure Commission reports [ 1 | 2 ] that HSUS is the only cash contributor to the campaign so far—putting $150,000 of its donors' money into the campaign in January.

Here are three animal-welfare reasons why voters should squawk when HSUS’s wing-flappers solicit their support to criminalize the sale of "regular" eggs:

Why would anyone interested in the welfare of chickens want to recommend a wholesale switch to a system that will end up making conditions worse for more of them? It’s a mystery.

But more than 40 animal rights and environmental groups have already endorsed HSUS’s ballot measure. Not surprisingly, a large majority of them are from out of state, and few have any practical experience working with poultry.

Here are a few of the more notable ones:

All but the last of these groups are abolitionist in nature. They’re less interested in cage-free eggs than in liberating chickens from their farm-bound existences. So their endorsements only make sense within the context of HSUS seeing “cage-free” campaigns as a stepping stone to eliminating egg farming entirely.

Washington-based animal rights activists understand this intuitively, which is why they’re all endorsing HSUS’s measure. Here are a few of the most notable ones:

The endorsement list will undoubtedly grow, of course, as HSUS’s canvassers persuade restaurateurs and other businesses to lend their names to the cause. We’re left to wonder, though, if these endorsers will get the benefit of the whole story before signing on. Somehow we doubt it.