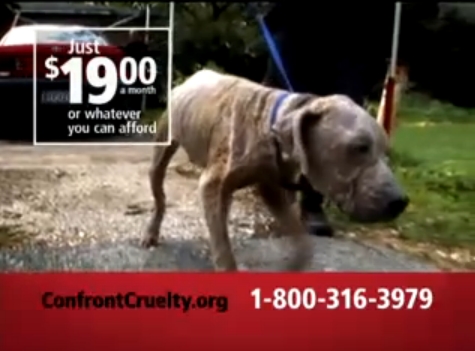 In case you missed it, the Los Angeles Times editorial board wrote about HumaneWatch on Sunday after we recently placed two ads in the paper. The Times confirmed what comes as a shock to many animal lovers: The “Humane Society” of the United States shares less than 1 percent of its budget with hands-on pet shelters.

But the Times also took issue with our ads, calling them “misleading.” Ironic? Absolutely. The only misleading piece of this puzzle is HSUS’s advertising strategy.

HSUS populates its ads with tear-jerking pictures of dogs and cats, even though it shares mere pocket change with homeless pets. The Times seems to suggest that this is okay, justifying it with the argument that HSUS “never claimed that its mission is to fund local animal shelters.”

This “HSUS never said” argument is worth addressing, in part because partisan HSUS supporters repeat it ad nauseum as an excuse for HSUS’s practices. Which is a huge cop-out.

We’ve mentioned how one recent HSUS TV ad (the one featuring Jenna Elfman) included images of 44 different animals—42 of which were dogs or cats. That’s 95 percent, and it’s no fluke.

In HSUS’s “Countdown to Stop the Suffering” ad (featuring Wendy Malick), 29 out of 32 animals (91 percent) are dogs or cats. The pet-count in HSUS’s “Silent Victims” ad (also featuring Malick) is 30 out of the 32 on-screen animals (94 percent). HSUS’s “The Future is in Our Hands” and “All Around Us” commercials both have similar numbers.

Nowhere in these commercials does HSUS tell viewers that so little of its budget goes to shelters like those that actually help find “forever homes” for dogs and cats. HSUS doesn’t run any disclaimers saying that it’s not a pet-shelter umbrella group. None of the ads’ voice-overs mention the lack of any affiliation between HSUS and “humane society” pet shelters. There’s a disclaimer buried somewhere on HSUS’s website, but donors who dial into the number that appears in some of HSUS’s ads probably won’t read it. And even those who find HSUS’s carefully crafted disclaimer won’t be told that the amount of HSUS’s budget granted to shelters is less than one percent.

It’s true that HSUS does do some things that donors expect it to. Operating an “animal rescue” team, for instance, is laudable. We wish the animals HSUS “rescues” weren’t generally dumped at hands-on shelters without the resources to care for them, but we imagine HSUS would consider such objections a hair-splitting exercise.

After all, where is the money for pet shelters going to come from? Each of HSUS’s 30-plus full-time lawyers is a mouth to feed. And the $16.3 million accrued to HSUS’s pension plan won’t divert itself. (That’s more than HSUS gave in grants to pet shelters during the same years those pension dollars flowed.) And spending half of your budget on overhead (according to one charity watchdog) isn’t a formula for funding other needy organizations.

And don’t get us started about all of HSUS’s lobbying, some of it spent in order to “get rid of” animal agriculture.

HSUS is welcome to raise money, but it should do so ethically. Using images of dogs and cats (which presents Americans with a specific impression) to mask animal-rights campaigns and questionable spending doesn’t qualify.