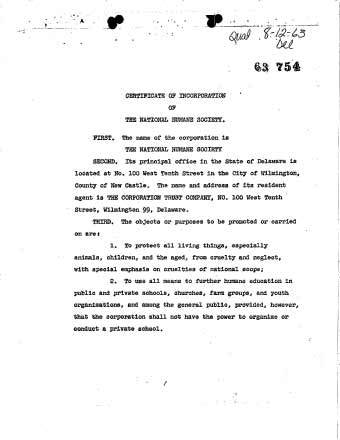 This is another verbatim quote of HSUS's original Articles of Incorporation from 1954. (See page 4 of this PDF.)

We swear we're not making this up:

No substantial part of the activities of the corporation shall consist of the carrying on of propoganda [sic] or otherwise attempting to influence legislation or to participate or intervene (including the publishing and distribution of statements) in any political campaign on behalf of any candidate for public office. (emphasis added)

If we tried to count how many times HSUS has tried to influence legislation with propaganda materials in the last decade, our Windows Vista calculator would crash.

Any of you nonprofit attorneys out there, let us know what you think. Is it up to HSUS's members to rise up and complain? Or can anyone take action?

Maybe next year at the HSUS annual meeting, someone will actually make a motion to amend the Articles and strike out this provision. That would be the only way to be honest about what HSUS is doing with its donors' money, after all.

How would you like to be a fly on the wall in that meeting? Can you imagine Wayne Pacelle getting up and saying:

Mr. Chairman, I move that the corporate Articles of the Humane Society of the United States be amended specifically to permit—nay, require—the use of propaganda in our systematic approach to lobbying. Who will second the motion?

Yep. Definitely a moment tailor-made for a hidden camera.

Just for the record, here's how the ol' Wikipedia defines "propaganda":

Propaganda is a form of communication aimed at influencing the attitude of a community toward some cause or position. As opposed to impartially providing information, propaganda in its most basic sense, presents information primarily to influence an audience. Propaganda often presents facts selectively (thus possibly lying by omission) to encourage a particular synthesis, or uses loaded messages to produce an emotional rather than rational response to the information presented. The desired result is a change of the attitude toward the subject in the target audience to further a political  agenda. (emphasis added)

Sometimes this blog just writes itself.