Quote of the Year - HumaneWatch 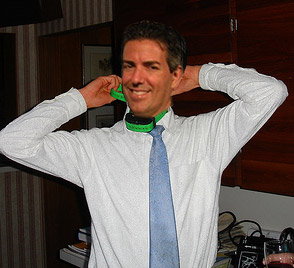 Last week, Humane Society of the United States (HSUS) CEO Wayne Pacelle said that dog-fighting kingpin Michael Vick “would do a good job as a pet owner.” We’ve done our level best since then to make sure as many people as possible know about Pacelle's horrible lapse of judgment, and about his ensuing attempt to weasel his way back toward respectability.

But Vick isn’t doing himself any favors by perpetuating the fantasy that the football world will look kindly on him if he wants to put more helpless pets in harm’s way.

Today Fox Sports columnist Alex Marvez lists what he thinks would be the ideal Christmas gift for each National Football League team. Here’s what he says the Philadelphia Eagles need most:

An electric shock collar for Michael Vick that goes off any time the quarterback speaks about wanting to own another dog in the future. This would serve as a painful reminder of how Vick should have felt when torturing animals for his own sadistic pleasure.

How about two matching collars? One for Michael Vick, and the other for his cheerleader in the executive office of what used to be America’s most respected mainstream animal charity. The next time Humane Wayne spouts off about giving a violent felon with a history of organizing and funding dogfights another pet to abuse … ZAP.

Come to think of it, if HSUS’s Board of Directors wants to raise a little extra holiday cash, offering a “Wayne Pacelle chew toy” in the Humane Domain store might be a smart way to go. We’ll take a hundred.