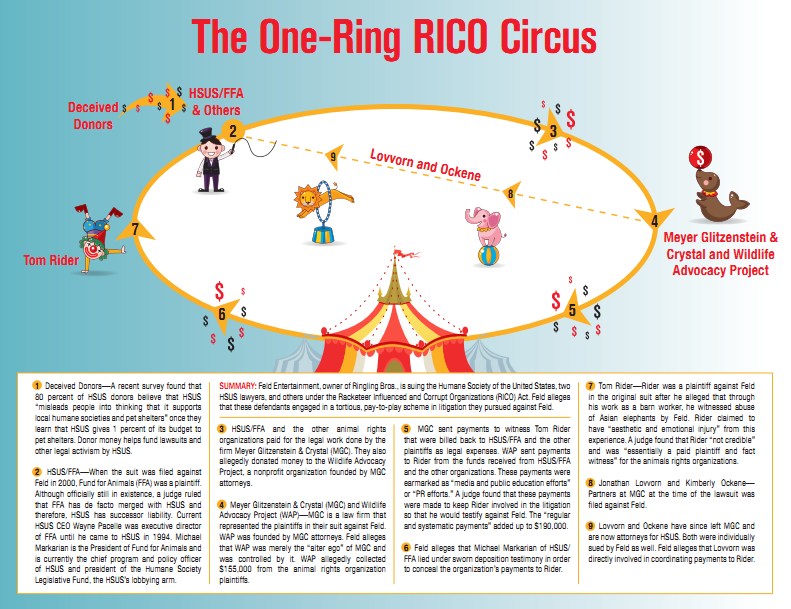 Over the weekend news broke that Ringling Bros. is shutting down its circus in May, after a storied 146-year existence. This is obviously a loss for animal lovers who enjoyed the Big Top shows, as well as the company itself, which has been harassed for years by animal liberation extremists at the Humane Society of the United States and PETA. Ringling fought the good fight for years—even winning a $25.2 million settlement in litigation against HSUS and other activist groups—but the news that the circus is shutting down isn’t surprising. It was only a matter of time.

Why? Because the elephants are gone. In 2015, Ringling phased out elephant acts from its shows due to pressure from activists and local elephant bans. According to the company, ticket sales declined precipitously afterward, leading to this weekend’s decision to shut down the traveling show altogether.

That teaches us two things: One, at the very least a large segment of the public has not bought into the animal rights extremists’ claims that circus shows are bad for animals. People wanted to see elephants. When the elephants were gone, so did their reason for going to the circus.

Two, local legislation can cripple a national business. The HSUS/PETA contingent lobbied for localities to pass bans on elephant guides, a tool needed to safely handle elephants. These were effectively bans on Ringling coming to town, and contributed to Ringling’s decision to phase out elephant acts completely.

While a lot of political matters are best dealt with at the local level, what constitutes proper elephant handling isn’t one of them. Neither is what animals pet stores can sell, or what kind of eggs and pork supermarkets can sell. HSUS and PETA can’t get their legislation passed at the federal level, so they’ve turned to states and localities to do their bidding for them. Perhaps more preemption bills are needed, starting with the King Amendment, which would override HSUS-backed state laws that interfere with common agricultural practices.

For years, activists at PETA and HSUS did everything they could to stop Ringling Bros. from having elephants and often claimed that capitulating would be good for the circus business. In this case they were obviously wrong–but then again, PETA and HSUS don’t care. Their goal is total animal liberation and they don’t mind shuttering businesses and putting people out of work to do it.

These radicals are moving on to their next targets. These people don’t believe in zoos and aquariums either, so we expect them to ramp up their attacks on these institutions. Everyone from a farmer to a pet owner should make sure to take notice. At the end of the day, anyone who owns an animal is an HSUS/PETA target.