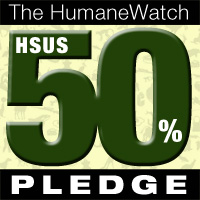 Today marks the first anniversary of our HumaneWatch 50% Pledge. One year ago we promised to shut down this website for good if the Humane Society of the United States made one simple promise: to give 50 percent of its budget to pet shelters. (Currently, HSUS shares less than 1 percent of its budget with hands-on pet care and adoption organizations.)

We have yet to hear anything but silence from HSUS and its CEO, Wayne Pacelle.

Sure, it’s a little discouraging. We’d be justified if we were harsh. But let’s give HSUS a break. When you spend $121 million a year, it’s not like you can just go from 0 to 60 at the drop of the hat.

After all, HSUS needs to be “humane” and pay its 30-odd salaried lawyers. The group’s lobbyists have mouths to feed. And—c’mon!—redirecting that $2.5 million earmarked for HSUS’s pension plan? Retired executives previously making six-figure salaries have to enjoy the good life.

Seriously, though, it’s never too late for HSUS to do the right thing and start spending its donors’ money where they think it's going—to pet shelters, mostly. Pacelle can write pat-on-the-back blog articles all he wants (as he did yesterday), but sooner or later HSUS is going to have to put its money where his mouth is.

There’s good reason to get your spending in line with your image. We can wait another year if necessary, but the animals can’t.

Remember them? The animals?