Sale of the Century - HumaneWatch

Update: This post was, in our Editor's own judgment, a bit hasty. We've since reconsidered much of it, given that the actual text of the "Buckeye Compromise" isn't entirely consistent with what was presented at Wednesday's press conference. It turns out our Editor's enthusiasm was, in many ways, premature. 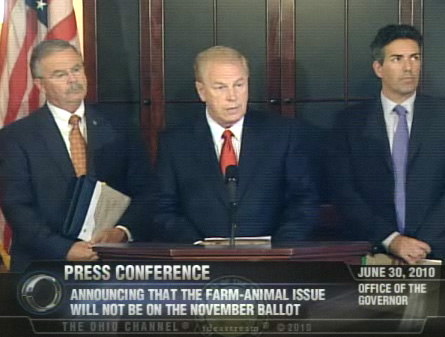 The next time I buy a house or consider a job offer, I want Ohio Farm Bureau vice president Jack Fisher as my negotiator. (That's him above, at left.)

A little over an hour ago, Fisher stood with Ohio Governor Ted Strickland (center) and Humane Society of the United States CEO Wayne Pacelle (the guy looking displeased) for a press conference, announcing that HSUS will be pulling out of Ohio. Call it a case of campaignus interruptus.

What the heck happened? Did the Farm Bureau fold like a tent and concede victory to HSUS, as other states’ farmers have done? (I’m talkin’ to you, Colorado and Michigan…)

Nope. Despite a self-congratulatory press release from HSUS, the group got practically nothing that it wanted from Ohio’s farmers. Instead, Pacelle has agreed to abandon HSUS’s whole “Ohioans for Humane Farms” front group in exchange for the equivalent of $24 in blue beads.

Let’s take a look at what each side in the HSUS-versus-Buckeye-farmers battle got. It’s not pretty.http://www.journal-news.com/o/content/shared-gen/blogs/dayton/ohiopolitics/entries/2010/06/30/kasich_has_narrow_lead_in_new.html

Starting to see the bigger picture? These “recommendations” and “promises” are just political maneuvers, executed by politicians, in order to hedge their bets against future political uncertainty.

Governor Strickland (D) is uncertain about his re-election. Most polls have him running even with Republican John Kasich, or slightly behind. He didn’t want every rural voter in the state coming out to crush HSUS, and then reflexively pulling the (R) lever for Governor.

Wayne Pacelle was uncertain that he could win, too. Buying your way to 500,000 signatures by importing paid operatives from other states isn’t the same thing as winning the hearts and minds of voters who are already suspicious of your motives. He didn’t want to walk away completely empty-handed (and with a blemish on his “perfect” ballot-initiative record).

Who seemed to be the least uncertain about the future? Ohio’s farmers. To be sure, they didn’t want to risk a razor-thin HSUS victory in November, or all the job losses, price increases, and economic devastation it would have brought. But I have to believe HSUS would never have made this deal unless its own internal polling looked dicey. And the Farm Bureau polls the public too.

Now that the press conference is over, of course, Ohio’s pundits will try to find meaning in the result. But one thing is clear: Wayne Pacelle got beat. The mighty Casey has struck out. And livestock farmers in other states are watching.