Second HSUS Board Member Protested Over Attack on Whistleblowers - HumaneWatch 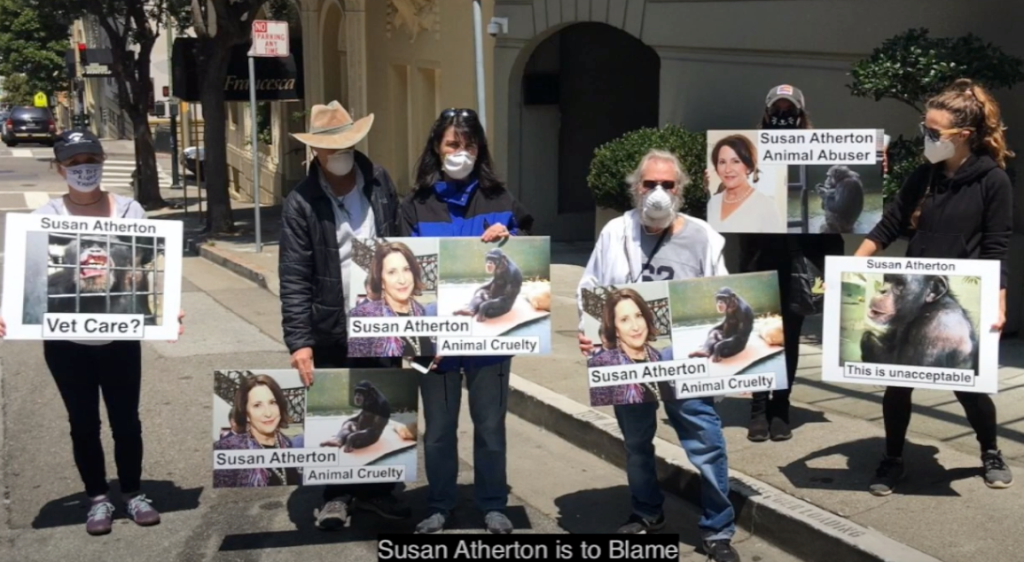 Former HSUS employees and fellow activists have now targeted a second board member of the Humane Society of the United States. We recently reported that activists had protested a business co-owned by HSUS board member Brad Jakeman in New York. Now, they are slamming Susan Atherton, a San Francisco-based board member.

They are protesting her because an HSUS-controlled sanctuary called Project Chimps is suing two women who went public with evidence of animal mistreatment.

This spring, the two women came forward with their concerns that chimpanzees at Project Chimps are not being given the care or facilities that they should be.

The women in fact represent a broader group of about two dozen former employees, volunteers, and donors who are concerned about chimp mistreatment. This larger group sent a letter–viewable here with names redacted–to the Project Chimps board in May outlining their concerns. They say they previously tried to resolve their issues privately, both within Project Chimps and by contacting outside animal rights groups.

Project Chimps responded by filing a lawsuit against the two women who went public–even as it acknowledged it was making changes to its operations that seem to confirm the whistleblowers had valid concerns.

HSUS leadership has typically taken the low road and circled the wagons in the past. The HSUS board defended its former CEO, Wayne Pacelle, after he was accused by multiple women of sexual harassment.

Time will tell if they advocate a change of direction from attacking the whistleblowers. But we won’t hold our breath.