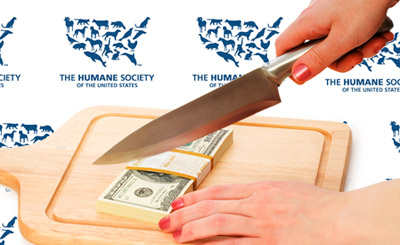 Truth be told, this part of the Humane Society of the United States’s history isn’t as much a “secret” as it is neglected—by the current generation of HSUS leaders and spokespeople, anyway.

Ever since HumaneWatch started making noise about how contributions to HSUS only support local pet shelters at the rate of less than 1/2 of 1 percent, the organization has been in constant damage-control mode. In particular, an HSUS “emerging media” employee and former paid lobbyist named Hillary Twining has spent seemingly countless hours trying to reassure the public that nothing is amiss.

Her basic argument (in her own words on April 5 of this year, although there are literally hundreds of similar examples) is that HSUS “was founded in 1954 with the specific aim of NOT replicating what is already being done by shelters.”

This kind of statement is how HSUS justifies spending dollars intended for the direct care of dogs and cats on programs that attack farmers, ranchers, zoologists, circus trainers, medical research scientists, and others.

It sounds good, except that it’s not true.

Twining doesn’t seem to know much about the organization she works for. Neither does her paid partner in blog-commenting, Sarah Barnett (another frequent online damage-control participant). So for their benefit, let’s take a look at HSUS’s history—including a financial arrangement that used to help real humane societies quite a bit.

In Protecting All Animals: A Fifty-Year History of the Humane Society of the United States, HSUS’s own partisan in-house historian Bernard Unti writes [p. 5] that the organization was “determined to raise the quality and extent of humane work at the local level” during its early years. And in listing “the principal activities of The HSUS during the 1950s,” Unti specifically includes “support for local [humane] societies and individuals trying to form them.”

He also tells the story [p. 6] of Patrick Parkes, a new HSUS employee in 1961 (seven years into HSUS’s existence) who would later become the group’s “director of services”:

After hiring Parkes [HSUS founding President Fred] Myers sent him out for training at a small shelter in Lucerne County, Pennsylvania, that The HSUS had helped to establish. There Parkes euthanized animals, cleaned kennels, and studied the typical methods in the field at that time.

Why would HSUS do this? Wasn’t it always a national “policy” and lobbying group? Hillary Twining seems to think so. She’s wrong.

The original bylaws of The HSUS provided for its ownership and operation of shelter facilities through established branches conceived as integral units of the parent organization. Such ownership proved to be impractical on several grounds, but it did not prevent The HSUS from becoming deeply involved with local animal shelters and their problems. Ultimately, it did so by establishing an affiliates program to forge closer ties to local societies for the prevention of cruelty to animals.

Provided Unti’s account is accurate, HSUS clearly desired from its very beginnings to be “deeply involved” with pet sheltering and aimed to be a true “national” humane society—the sort of umbrella group that 71 percent of Americans mistakenly think it is today.

Unti’s book contains one other fascinating admission. Until the early 1970s when John Hoyt became HSUS’s president, HSUS’s policy was to share most of its revenue with the state-level HSUS affiliates that worked on direct animal care [page 14, emphasis added]:

One of Hoyt’s priorities was the abolition of the organization’s five state branches. Under long-standing arrangements, The HSUS designated 60 percent of all funds raised from members within the branch states for use by the chapters, with the national organization taking the rest. The state chapters were essentially independent entities using the same name and determining their own program and were in effect friendly competitors with the national organization. Hoyt strongly believed that The HSUS had to be just one entity.

John Hoyt did, in fact, collapse HSUS’s affiliate program, replacing it with the “regional office” model that HSUS still uses today. In contrast with the “independent” HSUS affiliates of the 1960s and ’70s, HSUS Regional Offices are wholly-owned subsidiaries of the mother ship.

In his “1991 Report of the President,” Hoyt would later brag about demolishing HSUS’s relationship with local humane societies, in favor of a more centralized power structure that left all the money in Washington, DC:

I recall with great satisfaction my determination to establish the regional office concept in the early 1970s in the face of skepticism and outright opposition. But with the support of a board of directors who shared my vision of the importance and validity of this concept, the regional office structure became a reality. And it seems quite clear that these offices have proven to be one of the great success stories of The HSUS.

Success, we suppose, would be defined here in terms of financial might and political power. But it’s hard to tell.

Here’s the bottom line: Hillary Twining’s PR spin notwithstanding, there’s gobs of evidence—much of it provided by HSUS’s own paid historian—to contradict the idea that HSUS has never been in the business of getting its hands dirty helping local pet shelters.

And lest you think Twining is a rogue HSUS employee who’s buzzing from a few too many soy lattes, HSUS CEO Wayne Pacelle consistently backs her up. Here’s what he said in one March 2010 interview:

We were founded in 1954 specifically to tackle the national problems facing animals, such as puppy mills, inhumane slaughter, animal fighting, and animal trafficking, through education, public policy, investigation, and other conventional means suited to a civil society … that has been the purpose of HSUS for more than 50 years

Again, this isn’t true. Pacelle ignores the 60%/40% financial split with animal welfare groups in five states, which used to be the norm in his organization. (That “split” is now effectively 0%/100%.)

The more we compare HSUS’s early intentions with its present reality, the more clearly a picture of “mission creep” comes into focus. Consolidating power may be good for HSUS’s bank accounts, pension plans, and lobbying muscle, but it hasn’t done much for pet shelters in American communities.