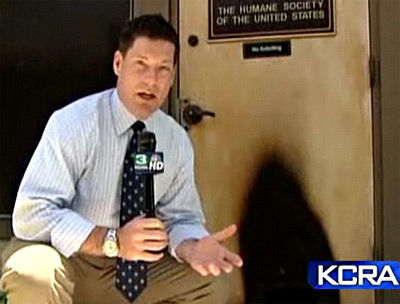 According to KCRA-TV3 in Sacramento, a serial arsonist has set six fires this week in California's capital city—including one at the Humane Society of the United States's former office location. The fire scorched the front door (which still bears HSUS's name on a plaque) but didn't do more serious damage:

Fire spokesman Christian Pebbles said the front door of the former Humane Society office, which is in the 5300 block of Madison Avenue, was burned.

Eric Sakach from the Humane Society said there's Humane Society signage on the building, but the office was closed in 1998. The organization still owns the property, he said.

Phone books were found stacked against the front door and were apparently set on fire, Sakach said.

This is obviously a horrible crime spree, and our hope is the same as it is every time an animal-rights arsonist tries to burn down a restaurant or a medical research lab. We hope the perpetrator is caught quickly.

But what in the devil is HSUS doing holding on to unused office real estate for twelve years? You'd think HSUS would have liquidated a few idle assets before panicking millions of Americans into donating yet more money.

How many other HSUS-owned buildings are collecting dust out there? With all the group's fundraising mailers criss-crossing the country, it seems like a fair question to ask. Wouldn't it be great to see some of this surplus property on the market, and to have the proceeds go to actually help dogs and cats? (Remember them? According to Wayne Pacelle, dogs and cats are the reason people join HSUS in the first place.)