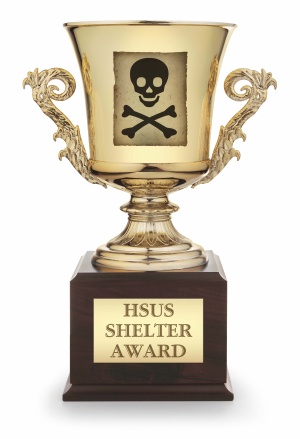 The Humane Society of the U.S., not to be confused with your local humane society that generally does good, hands-on work, offers little support to pet shelters. Just 1 percent of the money it raises is sent to local pet shelters—a sordid little factoid that even 90 percent of HSUS’s own donors don’t know. (And they apparently aren’t too impressed upon learning it.)

So while it doesn’t have a whole lot of grant money to go around—hey, pension plans don’t fund themselves—it does have the occasional award to hand out. Last month, HSUS and another group gave a “Shelter We Love” award to the Davidson County Animal Shelter in North Carolina.

But the award is rubbing some animal lovers the wrong way. According to YesBiscuit!, DCAS had an 88 percent kill rate in 2010, which went down to 87 percent in 2011. And DCAS euthanizes animals in a gas chamber—a tool that even HSUS said it “extremely disfavor[s]” after several animals it rescued and dropped off at a shelter partner were put down via gas chamber. (Some “rescue,” eh?)

We’ve only seen one animal shelter with a higher kill rate: PETA. Indeed, People for the “Ethical Treatment” of Animals regularly kills over 90 percent of the cats and dogs in its care, according to documents it files with the Commonwealth of Virginia. Would PETA also qualify for a “Shelter We Love” award from HSUS? Given that the two groups have a nearly identical animal rights agenda, it wouldn’t surprise us.

Now, HSUS says DCAS is making improvements, thanks to local volunteers. (HSUS didn’t make any grants to DCAS in 2009 or 2010, according to its tax returns.) That’s good, but we’re betting that DCAS could substantially reduce its euthanasia rate a lot faster if HSUS charitably offered some of the $32 million it has stuffed away in hedge funds, or it could at least get rid of that “extremely disfavored” gas chamber.

In fact, that’s probably true of a lot of underfunded shelters around the country. But HSUS apparently can’t bear to tap more into its $200 million in assets—which certainly tells you a lot about its priorities.