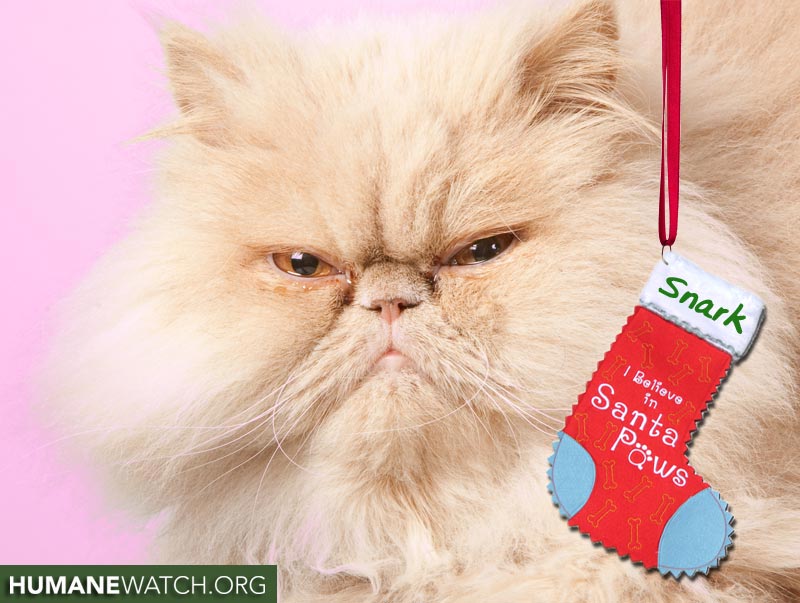 Editor's note: "Snark" is HumaneWatch’s resident feline fussbudget. He tells us that if there’s anything he hates more than stepping on dead pine needles, it’s holiday profiteers. So we weren’t surprised at all when he typed out a little Christmas zinger for HSUS CEO Wayne Pacelle on his new Droid phone. (“What?” he asks, “I can’t be a 21st Century cat?”). We think “Mister Precious Kitty Snark-Snark” (as his friends call him) actually got the phone so he could play Angry Birds in between meals and sun-napping. But we'll never really be sure. Here’s Snark’s View.

'Tis the season, yadda-yadda. Yeah, I get it. If I see that damned Victoria’s Secret Christmas commercial one more time, I’m going to start buying underpants. Do we really need supermodels wearing Daedalus & Icarus wings (look it up), and not much else, on the tube while I’m trying to groom myself? Geez… Santa Claus is a really, really old man. Give him a heart attack with all the bouncing and jiggling, why don’t you? And then you deal with the screaming kids when he’s gone, and all the unemployed elves…

Lucy Van Pelt was right: “Christmas is a big commercial racket [that’s] run by a big Eastern syndicate.” The Humane Society of the United States is run from the East Coast, and the kid who did the voice of Lucy grew up to be a big animal rights nut. Are you getting my meaning here?

I'm just not a fan of charities whose holiday Silver Bells make the "ka-ching" sound. Yeah, I'm talking about you, pretty boy.

Ebeneezer Pacelle never let a Black Friday go to waste, if you catch my drift.  Remember that HSUS “25 days of giving” shtick for pet shelters? Yeah—it’s all about helping pet shelters find new ways to give money to HSUS. I had a bait-and-switch litter-mate like that, named Curly. He would taunt the rest of us by tossing a Pounce treat over our heads, and then as soon as we looked up, the little bastard would swoop in and take all the catnip. Kitten McGee (my favorite sister) fixed his wagon. She made sure he was first in line on “neuter day.”

Anyhoo, HSUS is looking more like Overstock.com these days than an animal welfare charity. There’s this “Humane Domain” thing that they set up to sell $75 snow-globes, $48 bathrobes, $36 doggy tree-top angels (yeah, like a dog is an angel …), and other kitschy litter-box logs you don’t need.

Desperate for your very own pig ornament? That’s 20 bucks. You’ll spend another 28 dollars for a “fur-free” t-shirt. (It’s got no fur, but I’ll be happy to spit a hairball on it for another 50 cents.) Charm bracelet? That’ll be $58. How much you wanna bet every shipment comes with a fundraising mailer inside the box? All the better to line your bird-cages with…

I’m not saying I wouldn’t enjoy a nice personalized “Meow” food bowl, but theirs has a drawing of two dead fish on it. And the $24 “Bark-B-Q” apron? The dog is cooking—wait for it—sausages. (I thought we were supposed to be vegetarians! Does Paul Shapiro know about this?) 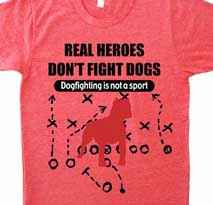 And then there’s this gem: A $19.50 “Real Heroes Don’t Fight Dogs” t-shirt, complete with football “X’s and O’s,” like they hired Knute Rockne to draw up a play for their next fundraising video. (“Go out there and win $19 a month for the Wayner.”) Does anyone not think this is a veiled jab at Michael Vick? The same Michael Vick HSUS is promoting like he’s the second coming of James Herriott?

This must be what an ice-cream headache is like.

I think Pacelle and Company ought to change the t-shirt’s slogan to give their star quarterback a little wiggle room. How about “Real Heroes Get Their NFL Employers To Pay Off HSUS So Their Images Can Be Rehabbed In An Orwellian Display of Hubris”? (That may be a bit too long. I’ll work on it.)

Does anybody really think it’s a good idea to give Michael Vick another dog? Besides Michael Vick and Wayne Pacelle, I mean. Look—I know dogs. I get chased by the best of them, and when I’m all, like, “RRaaiiirrrr” and they’re all like “Wooof yip yip Woooof,” we’re actually talking about whether Vick’s healed rib cartilage will last longer than his next pit bull.

Or look at it this way: If you think Vick should ever be a dog owner, why don't you give him your pooch for a month to prove it's a good idea? A-ha! Got you there. If "Ron Mexico" decides he wants a cat, I sure as hell ain't going.

But Wayne Pacelle says he’ll make a good pet owner, so that’s the end of it. And maybe he’s right: O.J. Simpson was a flawed individual with absolutely sick football talent, and he got his second chance. Look how great that tur—

Uh … forget I said anything.

Maybe we’ll have a Christmas Miracle, like if HSUS announces that  half of the “Humane Domain” profits will go to pet shelters or something. We already know the first half goes to overhead costs. Can’t my shelter kitty friends have a little somethin’ from the leftovers, Wayne?

It’s not like anyone is asking you to hock your collection of polyester suits, or kill the Spray Tan of the Month club. HSUS can afford to chip in. Just bleed the pension plan a little. Or clean my litter box. Either one is fine. I really don’t care.