Some Observations about "Spay Day" - HumaneWatch 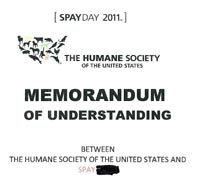 It’s February again, and HSUS yesterday held another “Spay Day” event. The event involves spay/neuter promotion and a user-submitted photo contest, with visitors able to vote on which photo they think is the best.

Many of them are quite cute. But HSUS’s Spay Day ploy is not.

Quick background: Spay Day was started by the Doris Day Animal League back in the 1990s, but HSUS took it over after it merged with DDAL in 2006.

Here’s how it works this year (under the banner “World Spay Day”): Contestants submit a cute picture of your pet, give their contact info to HSUS (probably to be counted as a “constituent” of HSUS), and then encourage their friends and family and others to “vote” for their photo.

But voting isn’t free, no siree. Votes cost $1 each, with a minimum purchase of 5 votes. Now, to HSUS’s credit, the money gets passed through to an organization designated by the photo contestant:

So is HSUS giving any of its own money? Hard to say. But because it is taking custody of the money from the photo contest voters, its tax return should show HSUS making the grant to the local shelters (even though HSUS is really just a pass-through). In effect, that would boost how much HSUS is giving to local shelters, which already is just 1 percent of its budget.

And there’s another catch. HSUS CEO Wayne Pacelle recently claimed that there are “more than 100,000 animals of all kinds HSUS staff provide direct care to every year.” That’s a figure for 2010, in which HSUS counted 68,000 spay/neuter surgeries that occurred during Spay Day.

However, here’s what it says on HSUS’s 2010 tax return, filed under penalty of perjury:

The HSUS and its affiliate Humane Society International launched an online pet photo contest. Entrants in the contest could fundraise on behalf of nearly 300 eligible spay day event organizers. Overall, more than 500 local organization, veterinary clinics, and individuals hosted Spay Day events in 49 states, the District of Columbia, four US territories, and 39 other countries, resulting in more than 68,000 spay/neuter surgeries worldwide.

So HSUS staff didn’t truly provide the direct care itself—it just hosted an event which “result[ed] in” spay/neuter surgeries—the actual work basically being done by other people. HSUS essentially ran a PR campaign and a photo contest. It's not that promoting spay/neuter is bad—but the way HSUS phrases it, you’d think Wayne Pacelle himself was out sterilizing pets.

You may recall that we obtained a Spay Day Memorandum of Understanding for last year’s event. The contract, between HSUS and a local group, shows what a great PR deal this is for HSUS. In exchange for (in this case) $2,000, the group receiving the money had to provide two glowing testimonials and two photographs for HSUS’s use.

Here’s our advice: Admire the cute pics that people submit, but bypass the big charade and just donate to your local shelter directly. If they have a spay/neuter subsidy fund, perfect.