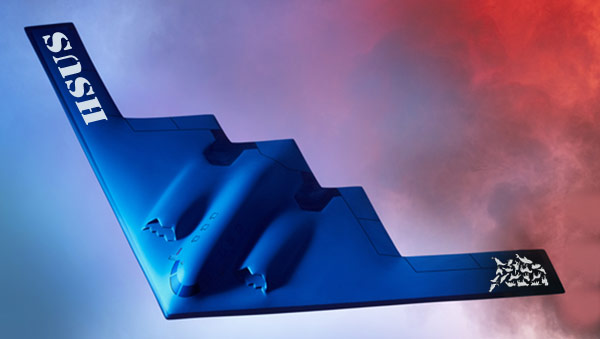 The more you dig into the history of the Humane Society of the United States, the harder it is to escape the conclusion that it (and its top spokespersons) used to be much more honest about their goals and ideas.

More PETA-like, if you will.

Today's HSUS campaigns are focus-grouped and carefully calibrated for mass appeal (and maximum fundraising impact). But it's almost like they also  mask a deeper desire to lead everyone—somewhere.

Given what we know about today's HSUS's institutional anti-meat feelings, for instance, it shouldn't come as a surprise to read that HSUS leaders were once quite open about their desire to promote a vegetarian revolution. So saith Vegetarian Times, anyway.

Has HSUS always been a vegetarian stealth-bomber? Let's take a look. 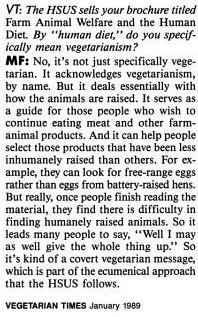 In January 1989, then-HSUS vice president Dr. Michael Fox (not the actor) spoke to Vegetarian Times, discussing his new HSUS-affiliated project called the Center for Respect of Life and the Environment. (Think of CRLE as animal rights plus early environmentalism.)

Fox let it slip during this interview that one of CRLE's brochures—sold by HSUS—promoted a “kind of a covert vegetarian message.” And he added that stealth “is part of the ecumenical approach that the HSUS follows.” The more things change, the more they stay the same.

You would never hear HSUS admit to this today. Nope, in 2010 we have the vegan Paul Shapiro claiming HSUS "doesn't have an anti-meat agenda."

There's nothing inherently evil about an anti-meat agenda, by the way. It's a free country. Be vegan if you want to. And try to convert the masses all you like. (Just be honest about it, please.)

Vegetarian Times also published a profile of PETA in 1989. The article led with glowing praise from a young Wayne Pacelle, then in charge of The Fund For Animals (which would later be folded into HSUS under his direction). 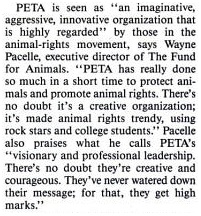 According to Pacelle, not only did PETA’s leaders deserve “high marks” because they had never “watered down” their message, but “PETA has really done so much in a short time to … promote animal rights.”

Would Young Wayne chide Current Wayne for “watering down” his animal rights message in his current role at HSUS? Maybe.

Or perhaps a more seasoned Wayne has come to understand just how radical most Americans think PETA has been all along.