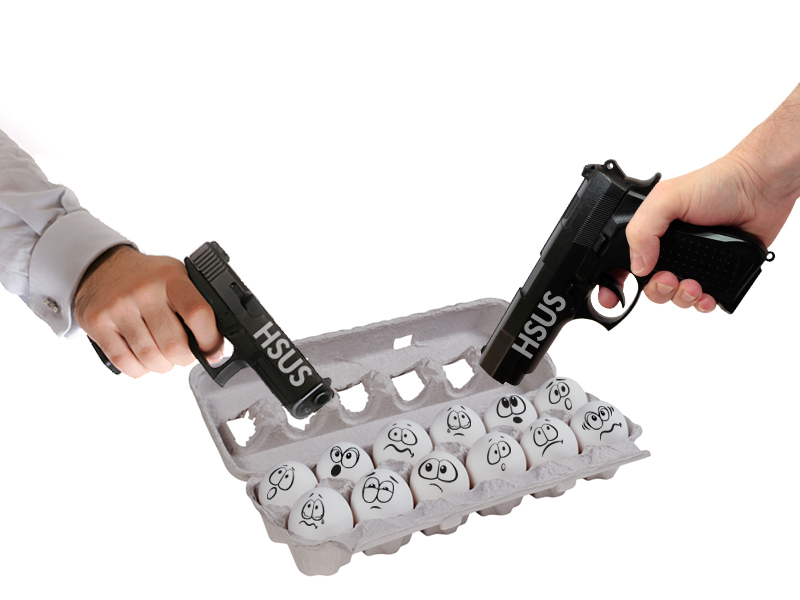 Ever heard of Stockholm Syndrome? It’s the psychological occurrence whereby a hostage grows fond feelings for or understanding towards his hostage-taker. And this phenomenon is manifesting itself in the egg industry’s main trade group, the United Egg Producers.

You may be familiar with UEP, which about a year and a half ago decided to work with the Humane Society of the United States to push for federal legislation regulating how farmers can house egg-laying hens. The legislation would ban conventional hen cages, forcing farmers to at a minimum move to colony cage systems.

That may seem strange. UEP had spent years and millions fighting HSUS state ballot initiatives, arguing in favor of letting consumers choose (a position we still support). The answer as to “why” the switch:  UEP hasn’t really agreed to work with HSUS any more than a business agrees to pay off organized crime elements to keep its business intact. Simply put, HSUS has far more money to spend on legislation and ballot initiatives that could bankrupt egg farmers trying to protect their farming operations.  Imagine the conversation between Pacelle of HSUS and Gregory of UEP as Pacelle conveying something like "Nice egg business you’ve got here. It would be terrible for something bad to happen to it."

But the UEP had essentially been taken hostage by HSUS. Last week, UEP head Chad Gregory spoke out against a column our executive director wrote in The Hill last month pointing out the flaws in letting HSUS sit at the bargaining table. Gregory takes issue with several of our points, but we’ll explain to you (and him, since he reads this website) why he’s wrong.

We’ll quote Gregory in italics, followed by our reply in normal font:

[UEP] represents farmers who produce 90 percent of the eggs in the U.S.

True, but we’ll note that UEP never held a vote of its membership on the proposed partnership with HSUS, according to our sources.

farmers with fewer than 3,000 hens are specifically exempted from the proposed standard.

This line is intended to assure the reader that “small farmers” will be protected. However, 3,000 hens is actually quite small. Farmers with 300,000 hens are still considered small in the egg business.

consumers support these enriched colony cages by a margin of 12-to-1 and consumers would continue to have their choice of eggs from cages, cage-free, and organic production systems

Then what is the need for federal legislation? Farmers can make the change from conventional to enriched cages on their own individual timelines without the need for a forced federal timeline.

an independent economic study released last year that indicates that egg prices would likely rise less than 2 cents per dozen over a period of 18 years.

More than 6 billion dozen eggs are produced annually. Those pennies add up to at least a billion dollars in total. One California producer spent $3.2 million just to update one of its fifteen hen houses to enriched cages.

the Congressional Budget Office said the proposed legislation last year would not carry any taxpayer cost.

This may not carry a taxpayer cost in the sense of government funding, but it would drive up prices in the marketplace. That is a distinction without a difference.

the legislation would have the exact opposite affect [sic]– avoiding a patchwork quilt of 50 differing state laws on how eggs are produced – with a single national standard that all egg farmers could follow.

The only reason for the patchwork is the HSUS trying to pass laws they like and the UEP being outgunned in stopping them. Hence the UEP / HSUS “partnership." Which is worse: A couple of states with bad laws, or the entire U.S. with a uniform and slightly less bad law? Once you legislate hen housing on the federal level, it’s only a matter of time before animal rights activists keep making more demands to increase pressure on farmers and drive up costs for producers. In fact, HSUS spokespersons have already suggested that any cages are "inhumane."

We’ve said it before and we’ll say it again: HSUS is not an honest partner. Making a deal with an organization that scams the public in its fundraising and is in court on racketeering charges will only backfire in the long run. UEP is more of an HSUS hostage than a willing business partner.

Bottom line: if working with the HSUS is such a good idea for the industry, why did the UEP need to be dragged to the altar?