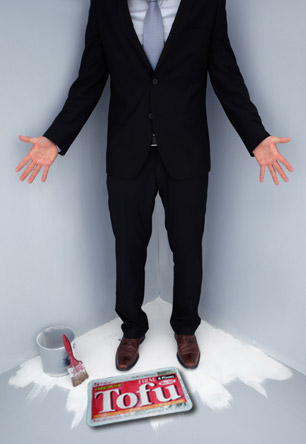 Is it just us, or has Humane Society of the United States CEO Wayne Pacelle finally painted himself into a corner?

On the eve of Pacelle’s big “town hall” meeting in Lincoln, Nebraska, the Omaha World-Herald asked him to respond to our charge that he “doesn't believe there is such a thing as humane meat … He wants to make more and more of us vegetarians by making the cost of meat, eggs and dairy beyond the reach of consumers.”

Pacelle acknowledged that he is a vegetarian, but said many members of his organization eat meat.

"That's just my choice, that's not the position of the organization," he said.

Let’s take a look at the evidence. This is for all you members of the press in Lincoln this weekend.

Gathered in national convention in San Francisco in 1980, the membership of the Humane Society of the U.S. formally recognized that:

The Convention resolved to:

…pursue on all fronts … the clear articulation and establishment of the rights of all animals … within the full range of American life and culture.

HSUS's official policy since 1980 has been that everyone should treat animals exactly the same way they treat people—and that those animals, without exception, should have “rights.”

If animals do have any “rights” at all, the right to avoid being eaten has to be at the top of the list. Cannibalism, the last time we checked, was still frowned upon. So according to this policy, meat-eating has to be considered along the same lines.

The idea of drinking milk, scrambling eggs, or eating meat is simply incompatible with the philosophy Lovenheim described in 1981. There’s no way around it—unless, like Wayne Pacelle, you think your charisma will magically permit you to paint a floor without a door behind you.

Even Wayne Pacelle can’t really pull it off. But he is still entitled to his own personal choices, of course. Everybody is. If Wayne Pacelle wants to be a vegetarian, that’s a fine decision. But only a tiny minority of Americans are going to fall in step behind him. This is why Pacelle needs to tell the Big Lie that while he may be having a tofu Thanksgiving, his organization isn’t trying to push it on the rest of us.

HSUS's history and its own materials tell a different story from the one Pacelle is selling. We’ll believe he's a non-judgmental “live and let live” vegetarian when his HSUS starts endorsing and promoting cage-free eggs, organic pork and dairy, grass-fed pastured beef, and free-range veal.. After all, those are the things HSUS is fighting for, right?

Thanks for sticking with us to the end of this essay. There's lots more evidence where this came from, but it’s safe for you to leave. (The paint has probably dried by now.)