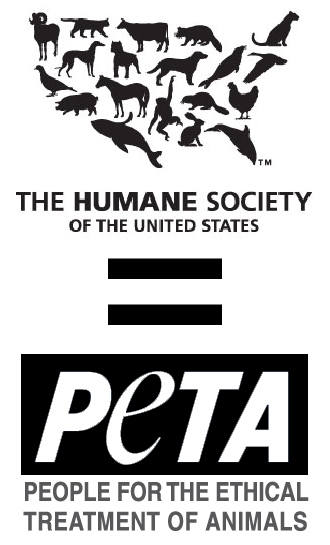 While this isn’t a website about PETA (if you want one, try this), it’s helpful to remember the bigger picture. HSUS is not about animal welfare, it’s about animal rights.

Your local humane society is about animal welfare—ensuring animals are treated well. The Humane Society of the United States is different than (and unaffiliated with) local humane societies. It’s about ending most uses of animals under the premise that use equals abuse. Given that the vast majority of Americans eat meat, for example, HSUS isn’t going to win influence by claiming, as PETA does, that giving a kid a hamburger is child abuse. HSUS is smart enough to know this.

Writing in The New Yorker a few years back, Michael Specter put it well:

It has been argued many times that in any social movement there has to be somebody radical enough to alienate the mainstream–and to permit more moderate influences to prevail. For every Malcolm X there is a Martin Luther King, Jr., and for every Andrea Dworkin there is a Gloria Steinem. Newkirk and PETA provide a similar dynamic for groups like the Humane Society of the United States…

When you do a little digging, you discover that PETA’s practically a revolving door for HSUS employees, a radical training ground before these activists don a more respectable brand (to say nothing of clothing…). Here’s a list of just some of the links we’ve dug up:

Keep in mind that this is just PETA and its quasi-medical front group the “Physicians Committee” for “Responsible Medicine.” (Click the link to see why the scare quotes are appropriate.) There’s a whole web of animal rights groups with essentially the same agenda: to eliminate the use of animals for food, research, clothing, and entertainment. Many HSUS leaders come from these groups—PETA-esque in worldview, but without the same budget or notoriety as PETA. Wayne Pacelle, Michael Markarian, and several HSUS board members hail from the Fund for Animals, an anti-hunting group, for one example.

Here’s HSUS and PETA in their own words. On the major goals, we can’t see any difference:

"Animals Are Not Ours to Eat"

"Animals Are Not Ours to Wear"

"Animals Are Not Ours to Experiment On"

"Animals Are Not Ours to Use for Entertainment"

“We don't want any of these animals to be raised and killed.”

“HSUS is committed to ending…killing for fur.”

“HSUS advocates an end to the use of animals in research…”

HSUS “opposes the use of wild animals in circuses”