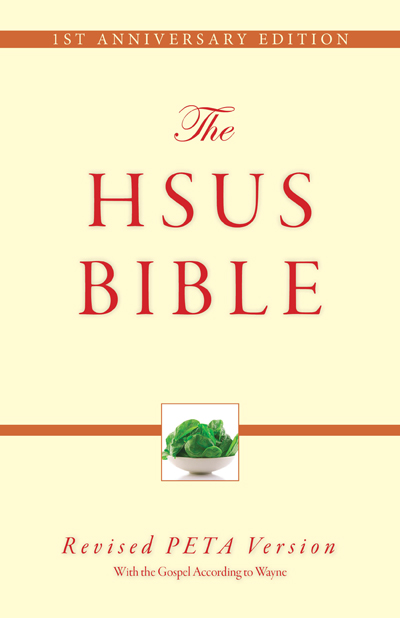 The Humane Society of the United States (HSUS) is a propaganda machine, twisting all kinds of facts to fit its narrative that everybody needs to adopt a PETA lifestyle and go vegan. It’s no surprise to check its website on any given day and find something out of context or flat-out false. But what we saw the other day shocked even us.

HSUS posted a defense of radical professor and animal “liberation” activist Peter Singer, who is notorious for his moral defense of killing newborns and children up to 3 years old and euthanizing the disabled. Singer once said that “if killing [a] hemophiliac infant has no adverse effect on others, it would, according to the total view, be right to kill him.” If that seems nuts, the essay on HSUS’s website, written by Charles C. Camosy, a professor of Christian Ethics at Fordham University, is even battier—it argues that Peter Singer actually generally “agrees with pro-lifers on abortion.” Minor details like homicide aside.

This argument is so patently ridiculous that it’s hard to know where to begin. It’s like someone arguing that Pontius Pilate actually saved Jesus.

Here’s what we think is going on: HSUS is trying to improve the brand of a notorious professor who is an intellectual saint in the animal liberation movement. (That seems eerily similar to how HSUS did P.R. rehab for Michael Vick—after getting $50,000 from Vick’s employer, no less.) HSUS CEO Wayne Pacelle has said that Singer’s views on animal liberation influenced him. HSUS co-wrote an op-ed with Singer last year, and now it is using this essay to make the argument to Christians that Peter Singer is actually just a misunderstood guy with whom they have a lot in common. In reality, Peter Singer is an atheist who wants total animal liberation, and this defense of him is trying to blur the lines and slip his fringe beliefs into mainstream religious thought.

That’d be laughable if it wasn’t so serious. HSUS launched a religion department about 5 years ago to churn out anti-farmer and animal rights propaganda with Christian, Jewish, Muslim, or other religious tints to it. The department is run by CEO Wayne Pacelle’s former live-in girlfriend. (We wonder how Wayne’s fiancée feels about him and his ex still working together.)

Skeptical? Just look at what Camosy’s defense of Singer led to. “Finally,” Camosy concludes, Singer “can help us rediscover the deeply Christian idea of self-denial—especially when it comes to fasting by avoiding meat and dairy.”

There you have it. A contorted defense of someone who justifies infanticide, made with an appeal to Christianity, leading to an opportunity to shill for veganism. There’s a lot we could write about the misanthropy of the vegan/animal liberation ideology and how it conflicts with mainstream religions, but we’ll leave that for another time.

It’s bad enough that HSUS rips off well-meaning Americans who think that their donations are going to help care for pets. Does HSUS really have to sink so low as trying to infect religions with animal liberation ideology? That’s something PETA has tried, as we documented a few years back in a report called Holy Cows. But since HSUS is really just PETA in a suit and tie—or perhaps now a clerical robe—you shouldn’t be surprised it has adopted the same tactics.