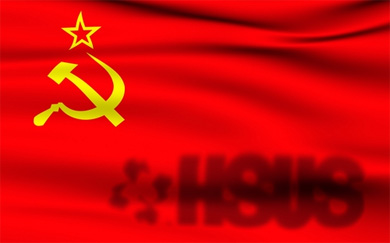 Actually, let’s get one thing straight first: It’s not “red-baiting” when you’re talking about a real-life communist. We’re not one for language taboos, especially concerning the history of our country. Sometimes it is what it is.

Our memory of American politics in the middle third of the 20th Century is typically dominated by accounts of Hollywood blacklists, an out-of-control Senator Joseph McCarthy, and the cantankerous House Un-American Activities Committee.

But the United States did have its share of actual communists in those days—people who would have preferred to see America go the way of Stalin. We believe one of them was a man name Fred Myers, who co-founded the Humane Society of the United States (HSUS) and provided what HSUS’s own in-house historian describes as the “vision and spirit that shaped the organization’s early agenda.”

Just so no one gets the wrong idea, we’re not suggesting that the leaders of today’s HSUS are communists, socialists, collectivists, fascists, or anarchists (although “narcissists” might apply to a few). But there’s a part of HSUS’s early history has never been honestly explored. And it’s not pretty.

As with everything here at HumaneWatch, there’s evidence. A few weeks ago, we received 273 pages of declassified documents from Fred Myers’s official FBI file; they were provided in response to a request made under the federal Freedom of Information Act (FOIA). Most of the documents are mundane and repetitive, but we’ll post the entire collection in the document library soon anyway.

For now, however, we’d like to focus your attention on nine pages.

Click here to read a four-page letter (with five pages of attachments) sent in 1958 to the chief lawyer working for a Senate Judiciary Subcommittee. The writer was Larry Andrews—another HSUS co-founder and one of the people who knew Fred Myers best. In his letter, Andrews laid out a case that Myers was “a communist and hence an enemy of our country.”

In 1956, Fred Myers testified before that Senate Subcommittee; he vehemently denied that he was a communist. Larry Andrews left HSUS shortly thereafter to lead the Arizona Humane Society, remaining  on HSUS’s Board of Directors until April 1958. Andrews wrote this letter less than a month after he was fully detached from HSUS. In it, he outlined for the Subcommittee a half-dozen instances in which Myers had allegedly perjured himself during that 1956 testimony. 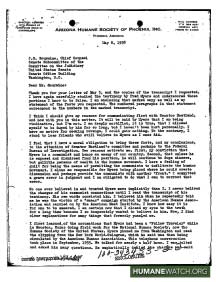 There are details. Lots of details. You should read it for yourself. But here’s the gist of what Andrews was saying, in his own words (emphasis added):

I feel that I have a moral obligation to bring these facts, and my conclusions, to the attention of Senator [James] Eastland’s committee and perhaps to the Federal Bureau of Investigation. Two reasons motivate me. First, my conviction that Myers is a communist and hence an enemy of our country. Second, that unless he is exposed and dismissed from his position, he will continue to dupe sincere, but gullible persons of wealth in the humane movement. I have a feeling of guilt for being the means of permitting the communists to infiltrate the humane movement. I alone am responsible for Myers being placed where he could create dissention and perhaps provide the communists with another “front.”

Again, this was not some crank writing an unsolicited letter to Congress. Andrews was one of the four dissident American Humane Association employees who broke away to create HSUS. He worked daily with Myers. He knew him well, and so did the FBI—far better than any modern observer could.

Reading the whole letter, Andrews seemed to be suggesting (although he never came out and said it) that Myers’s motive for starting HSUS may have been to find a way to raise money for efforts related to the domestic growth of the Communist Party. I’ve drawn my own conclusions. You can draw yours.

There’s much more to it than just this letter alone. I’ve written a biographical sketch of Fred Myers including details—largely drawn from the FBI’s meticulous investigations—about at least two organizations Myers ran during the decade before he co-founded HSUS, and another group for which he did public relations work. All three were related to Russian activities, and a hindsight look at U.S. intelligence-gathering efforts demonstrates that all of them were controlled by the Soviet government at the time.

Eight years before he co-founded HSUS, Fred Myers actually received The Order of the Red Banner from the Soviet Premier. We’re not making that up.

We realize this sort of talk will be controversial. But facts are stubborn things, and the main purpose of HumaneWatch is to analyze and discus primary documents like this letter from Larry Andrews and the rest of the Fred Myers FBI file.

Feel free to lodge your questions (or shout at us for red-baiting) in the comment section below or on the HumaneWatch Facebook fan page.