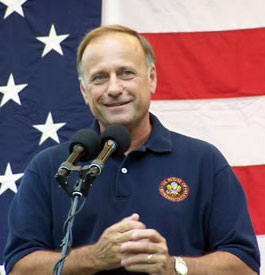 Iowa Republican Steve King is a rare bird in U.S. politics. He's proven time and time again that it's possible to openly criticize a political behemoth like the Humane Society of the United States and still keep your job in the U.S. Congress.

Rep. King grew up in a law enforcement family in Storm Lake, Iowa. He married his high school sweetheart. (they have three grown sons and three grandchildren.) Starting with a single bulldozer, he built a construction business from the ground up. His oldest son now runs it.

After serving in the Iowa State Senate for six years, Steve King was elected to Congress in 2002. He serves on the House Agriculture, Judiciary, and Small Business Committees. Rep. King is also an unabashed Constitutional "originalist," and you'll never catch him anywhere without a copy of the U.S. Constitution in his coat pocket.

Since he represents rural Iowa, it should come as no surprise that Steve King is a big supporter of agriculture (including animal ag). He's also an avid hunter.

This week the Congressman took time out of his busy schedule to answer our questions.

Congressman King, you have emerged as one of very few federal lawmakers who are willing to stand up to the bullies of today’s animal rights movement. Obviously, your Iowa district is engaged in a lot of animal agriculture, but we’d like to think you’d be pushing back against the deceptive Humane Society of the United States (HSUS) if you were representing central Des Moines instead. Am I right? Have HSUS’s antics officially “radicalized” you? Or are you just zealously representing the Western fifth of Iowa?

While serving in Congress, I have learned a great deal about the Humane Society of the United States. I came to understand that HSUS is a political machine masquerading as an umbrella organization for local humane societies. This is a radical activist group committed to working against livestock production and American farmers.

I would be opposed to the agenda of HSUS whether I was from Iowa, California, Hawaii, or any other state.  And I think all Americans need to be aware about what HSUS is really about.  While most local animal shelters perform commendable services in their local communities, the national HSUS organization is run by vegetarians with an extreme anti-meat agenda.

As you’ve shown through terrific research on your site, HSUS markets itself as an animal care organization but spends less than 1% of its $100 million annual budget in hands-on pet shelters. This isn’t right.

HSUS also goes after sportsmen. Hunters and anglers contribute more on a yearly basis toward habitat restoration that any other group. A certain portion of every gun sale, ammo sale, hunting equipment sale, and fishing equipment sale is returned to state wildlife agencies for wildlife restoration. You would think that HSUS would be happy about this, but they are not. Instead they seek to punish hunters. 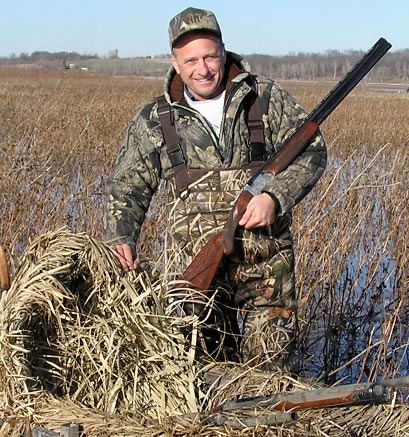 You recently wrote in a press release that “HSUS is run by vegetarians with an agenda whose goal is to take meat off everyone’s table in America.” We happen to agree with that sentiment, but not everyone is convinced of this. What do you tell Iowans who disagree, or who just can’t bring themselves to imagine that they’ve been deceived for so long?

I would suggest that everyone examine the facts. Remember, HSUS markets itself as an animal care organization but spends less than 1% of its budget in hands-on pet shelters. Wayne Pacelle has stated publicly that he is a vegan. Other members of his staff have said “meat equals abuse.” The recipes on the HSUS website are devoid of meat or animal products. The Thanksgiving Day recipe on the HSUS website is “Thanksgiving Day Tofu.”

If HSUS wasn’t pushing a vegetarian agenda, then why does its website state that “vegetarian eating is an effective and positive way to help farm animals?” HSUS is clearly and publicly pushing anti-meat agenda.

In your Baltimore Sun op-ed last week, you wrote that the inclusion of HSUS in the recent national 4-H convention might be “a troubling concession to anti-meat liberals working for the Obama administration at the U.S. Department of Agriculture.” Is the animal rights issue seen as a left-vs-right topic in Washington, DC? Or are there notable conservatives who are drinking the kool-aid too?

Generally speaking, those on the political left are the leaders of activist animal rights organizations and environmental groups. The current administration has embraced and even hired many of these types of individuals. The Department of Agriculture is quickly becoming less about farmers and more about food stamps and nutrition programs.

However, some conservatives drank the kool-aid too. For example, if you examine recent votes Congress has taken on animal issues, you’ll find that both conservatives and liberals have cast votes that hurt animal agriculture. Some conservatives have voted with HSUS to avoid the heat. Supporting agriculture and farming should be a bi-partisan issue. Organizations like HSUS are hurting both the political left and political right.

Anyone who watches politics “inside the beltway” understands that HSUS has done a pretty good job cozying up to Members of Congress on both sides of the aisle. What can be done to educate your peers about how HSUS’s goals aren’t in line with their constituents’ values? Are there more Congressmen and women like you? Is it just a matter of coaxing them out into the daylight?

I’ve long believed that the best antidote to waste, fraud, and abuse—in Congress or any other legislative body—is transparency. As more and more facts about HSUS enter into the public domain, elected officials will have no choice but to respond and reassess their existing notions of what that organization stands for.

This is why I believe the work you're doing is so important. New media outlets are today’s Woodward and Bernstein. I saw the impact that new media can have last year, as two independent journalists did remarkable investigative reporting about the corrupt organization ACORN and basically shamed Congress into responding.

As more Members learn about HSUS’s true record, I would expect some perceptions to change. For example, Members cannot claim to be pro-animal agriculture and simultaneously support an organization that has given money to the notorious anti-meat organization People for the Ethical Treatment of Animals.

We understand that HSUS has a contract with FEMA as its designated animal services provider for emergencies. Given the cloud of mystery surrounding how HSUS spent the $34 million it raised after Hurricane Katrina (and the fact that the group used an Internet pornography kingpin to build the fundraising website), do you think this is appropriate?

I do not think this is appropriate at all. The record clearly shows that HSUS has a habit of “raiding” locations of alleged animal abuse; and in the process of this fear mongering, HSUS capitalizes on self-serving publicity. Meanwhile, HSUS leaves local shelters in these same areas high and dry by offering no supplemental funding for the care of the allegedly affected animals.

HSUS falsely capitalizes on the goodwill generated by local (mostly volunteer) animal shelters to raise money for its political agenda. These are the credentials HSUS brings to the table as a “designated animal services provider.”

And it is completely inappropriate for HSUS or any organization with the stated goal of ending cruelty to animals to partner with any party that supports pornography.

As it stands right now, the United States doesn’t have a real “national humane society,” in the sense that there’s no national organization whose sole purpose is to raise money and put it in the hands of needy pet shelters. (Most Americans believe that’s what HSUS does, but that’s clearly not the case.) Is there anything a member of Congress (hint, hint) could do to get Congress to charter such an organization?

Because no “clearinghouse” exists for America’s pet shelters, HSUS is able to raise money with dishonest methods.

HSUS claims to “protect animals” during its fundraising process, but we know that very little of its budget is actually spent on animal protection, so the potential for fraud in this situation is great.

It may warrant a look to federally charter an organization whose sole purpose is to match interested donors up with animal shelters needing resources for direct animal care.

That press release we asked you about concerned a recent 4-H convention where HSUS managed to indoctrinate young people with its twisted view of animal agriculture. Has 4-H completely lost its way? Or is this a case where one or two brain-dead administrators at the 4-H head office made a bad decision? How much have you heard about this from your constituents?

I do not think 4-H has lost its way. Local and state 4-H programs do a wonderful job getting children involved in their communities. 4-H members work hard and put in long hours raising and training animals for county fairs all across the country. And local 4-H programs teach young men and women how to make their own contributions to animal agriculture.

National 4-H has yet to apologize for its decision to invite HSUS to present its program at its national conference. Their attempts to explain the presence of HSUS have led some of my constituents to reconsider supporting national 4-H programs.

I think now would be a good time for the young leaders of 4-H to present and pass a resolution through national 4-H that formally refuses to grant a forum to organizations that are anathema to the organization's grand traditions. National 4-H needs to fully understand to consequences of partnering with an organization committed to ending the American livestock industry.