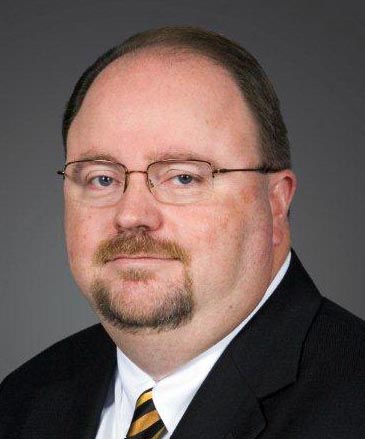 We got a call some weeks ago from someone at the Ohio Farm Bureau, wondering if we were available to speak at Ohio Livestock Coalition’s April 8 Annual Meeting. Ohio is in the middle of what will probably turn into a nasty ballot-initiative fight with HSUS, so we said yes.

Since Ohio is where HSUS is playing its anti-farmer game this year, David White is a good guy to know. David is the Ohio Farm Bureau’s Senior Director of Issues Management, a job that he earned after more than 20 years on the job. He’s been actively involved in promoting animal welfare (not to be confused with animal rights) since 1997. And like us, he’s been tracking the animal-rights “conflict industry” for a long time.

David grew up on his family’s seventh-generation, diversified livestock farm in southern Indiana, and earned a degree in agricultural education from Purdue University.

David White answered our questions last week about what Ohioans will see this year in the political war over farm animals.

David, by now everyone reading this is aware that Ohio is “ground zero” for HSUS’s ballot-initiative machine in 2010. And despite the fact that Ohio voters approved the creation of an independent “Livestock Care Standards Board” just last year, HSUS wants to force the Board to approve restrictions on farmers that are identical to what California voters green-lighted in 2008. What makes this year’s Ohio campaign different from the 2008 effort in California? HSUS won big out there. Should we expect a different result in the Buckeye State?

First of all, it’s not a done deal yet for HSUS. They will have to collect the signatures of more than 400,000 registered Ohio voters between now and June 30 to get their ballot initiative placed on the November 2 ballot. And the signatures must come from registered voters in 44 of Ohio’s 88 counties to qualify for the ballot.

What makes their proposed campaign different from California’s Prop 2 is that they want to use the state of Ohio’s constitution to direct the work of the Livestock Care Standards Board (which was created by Issue 2 last year).

We’re pleased that Ohio voters choose overwhelmingly to support Issue 2. The “enabling legislation” regarding this measure is currently pending in the Ohio General Assembly. We’re confident that the Board, made up of Ohio experts on animal care, food safety, biosecurity, and veterinary medicine, is the right approach to maintaining excellent farm animal care in Ohio.

HSUS’s approach is narrow—focusing only on how some farm animals are housed in specific housing systems. The approach of the Livestock Care Standards Board will be broad and meaningful, covering all aspects of how farm animals are raised and cared for.

If the HSUS measure gets to the ballot in November, we believe voters will continue to identify with the plans they voted to support in November 2009, that the right approach is to have the Livestock Care Standards Board study these issues and set the standards. The Board must consider overall animal health, on-farm biosecurity, animal disease prevention, food safety, the affordability of food supplies, best farm management practices, and animal morbidity & mortality data. That’s something that HSUS’s proposal fails to do.

But for readers who aren’t familiar with Ohio, can you bring us up to speed on the degree to which Ohio is an “ag state”? Most people think of Wisconsin for dairy, Oklahoma for cattle, Iowa for pork, and so on. What is Ohio’s biggest “skin” in the game here? And how big a chunk of Ohio’s economy will be tied up in knots if HSUS wins in November?

Ohio is also a significant livestock producing state. The Buckeye State ranks second nationally in egg production, tenth in pork, eleventh in dairy and turkeys, 12th in sheep and lambs (it’s the largest sheep-producing state east of the Mississippi), sixteenth in beef production, and in the top twenty for broiler chickens. We’re also a top veal producing state.

Livestock and poultry production contributes more than $8 billion to Ohio’s economic engine. It accounts for one-third of the state’s farm production, it’s responsible for 47,000 jobs, and it generates more than $299 million in tax revenue. Livestock farmers consume 94 percent of Ohio’s soybean meal and nearly 30 percent of the corn. So not only would family farmers raising livestock be devastated by HSUS’s proposal, but grain farmers could lose their number one customers.

As we write this question (March 7), HSUS and its allies in Ohio have just begun to collect signatures. Is there anything you can do to slow them down? We know farmers are busy actually producing something (unlike the animal rights industry), but what kind of assets can you mobilize to make the task more difficult for HSUS? Do you anticipate having to challenge the validity of thousands of petition signatures, or is that a waste of time?

We’re not suggesting that people shouldn’t sign petitions. But we are asking them to understand what they’re signing and the agenda behind the effort, and to make an informed choice.

HSUS’s approach is a thinly veiled attempt to advance its overall agenda, which is to encourage people to follow a vegetarian lifestyle. HSUS should step back and give the Livestock Care Standards Board time to work. Their actions to date show total disregard for Ohio voters, and for what they have said about farm animal care in our state.

Ohio can’t afford a measure like California’s Proposition 2. We intend to share these messages with the citizens of Ohio throughout this process. Additionally, we are encouraged by state leaders who have, on their own, expressed concern that HSUS is back in Ohio before the Livestock Care Standards Board has had a chance to work. Hopefully, Ohioans will hear that message, too.

It was about two years ago that HSUS released its undercover video from the Hallmark/Westland slaughter plant in Chino, California. Lots of people made a fuss about how HSUS sat on the devastating video for several months (instead of trying to immediately correct the abuse of livestock), just so it could leak the film to the media when it would help the “Proposition 2” campaign. Do you worry that another shoe could drop any day now in Ohio? Is there any indication that HSUS—or another group like Mercy For Animals—could crawl out of the woodwork with a new video that was shot some months ago? Do you have a plan in place in case this happens?

Actually, they’ve already been here. You may recall that the Humane Farming Association (HFA) placed someone undercover on a northeastern Ohio hog farm a couple of years ago. Unfortunately, this farmer was not following approved practices for handling farm animals, including euthanasia, and it was used in the HBO program Death on a Factory Farm.

This is probably why HSUS has specific language in its ballot petition signature drive to prevent inhumane methods of farm animal euthanasia, and to require that euthanasia methods be deemed acceptable by the American Veterinary Medical Association. It’s our job to ensure that Ohioans know that we do not condone, nor have we condoned these types of practices. It should be the responsibility of the Livestock Care Standards Board to establish (by rule) the types of handling and euthanasia practices that will be acceptable, and to declare that those who do not follow the Board’s rules will face civil penalties.

Campaigns like this one often come down to an urban-vs-rural showdown. And while HSUS has to gather signatures in at least 44 counties, it can still spend the bulk of its time in Cleveland, Columbus, Cincinnati, Dayton, Akron, and Toledo. Are you and your team doing anything in particular to reach people outside your rural “bubble”? We’d imagine that kind of outreach is important to do early, before the noise of the Congressional Midterm campaign season drowns everything else out.

All political issues are local, and we will very much be depending on a grassroots movement, just like we had on Issue 2, to defeat HSUS’s ballot initiative. We’re counting on the grassroots in every Ohio county, including urban and suburban counties.

Please keep this in mind: Issue 2 passed in 87 of the Buckeye State’s 88 counties, which included major urban centers and suburban regions. Overall, it passed 64-36 percent.

When considering groups like HSUS, we keep coming back to the Ayn Rand novel Atlas Shrugged. This morning we found myself musing on what would happen if Ohio’s egg, veal, and pork farmers stopped producing and just sat on their hands. We imagine the price of a dozen eggs in Mansfield would double pretty quickly. With veal farmers on the sidelines and dairy farmers scrambling to figure out what to do with every male calf born in the Buckeye State, retail milk prices could go up and down like a roller coaster. Ever given any thought to asking farmers to engage in a sit-down strike until HSUS packs up and leaves Ohio?

In theory, that sounds good, and it might work in Europe where they’ve been known to dump farm goods right into the street.

In reality, though, it probably wouldn’t work in Ohio. Farmers need to produce and market goods to keep the bills paid and their families fed. Some are already having a difficult time doing this because of low market prices. Many veal farmers are outright perplexed as to why HSUS continues to attack them when the American Veal Association made a 10-year commitment in 2007 to move every veal calf to group housing, and it looks to be on track to meet that goal in 2017.

What would you tell online ag muckrakers from Missoula, bloggers from Boise, Tweeters from Tupelo, and Facebookers from Fresno? How can we best reach the people you’ll be counting on in November?

Farmers (and their supporters and advocates) need to be engaged each and every day in positively promoting the benefits of modern animal agriculture. This can be done in a variety of ways: talking to the public, interacting directly with consumers and elected officials, creating and promoting websites about their farming operations, Facebooking, Tweeting, blogging, hosting farm tours, … and the list goes on and on.

We were successful in Ohio with Issue 2 because farmers proactively took control of the animal welfare debate away from the animal rights activists. This needs to be done on a continual, daily basis. If you’re not speaking up and speaking out about what you’re doing and why you’re doing it, who will? And are they telling the truth?

Farmers must be just as committed and passionate about telling their story and getting their message out as the activists are who oppose them. Consider making a commitment to devote 15 minutes each and every day, or 1-2 hours per week, in positively promoting agriculture and engaging the public in meaningful dialogue that will not only maintain their level of interest, but also result in additional support.

Thanks for sharing your insights with all the HumaneWatchers out there. And the best of luck to you in November. You represent the only side of this debate that’s driven by science and reason instead of emotion. We’ll all be watching and rooting for you.