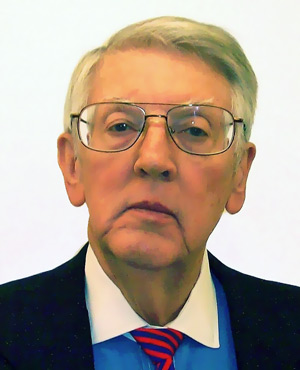 American dog breeders are known for being a passionate, no-nonsense crowd, and very few of them are fans of HSUS. So it didn’t surprise us when we learned a few months ago that they had a professional legal advocate in their corner with an appetite for combat. His name is Frank Losey.

Frank retired from the U.S. Air Force in 1990 after serving 25 years as a Judge Advocate, including trial work in over 100 courts-martial and a Pentagon stint as Director of Civil Law. He finished his military service with three Legion of Merit Medals, three Meritorious Service Medals, and the Air Force Commendation Medal. The Queen of England even invited him to Buckingham Palace for her Garden Party. (We're not making that up.)

He also had a Yorkie named Chaucer for 18 years. Frank tells us that he got engaged with dog breeders in Missouri (who are doing real battle with HSUS this year) as a way to repay Chaucer for teaching him the value of loyalty. Is that cool or is that cool?

If you’ve seen an Internet campaign called “How to Spay and Neuter the HSUS” (clever…), you’re already familiar with Frank’s work. He seems to be a really smart grassroots organizer, so we thought HumaneWatch readers would appreciate hearing from him.

Frank Losey was kind enough to answer a half-dozen of our questions last week.

Frank, thanks for tapping out some thoughts for all the other HumaneWatchers out there. We first came across your name in conjunction with an e-mail that at least five different people forwarded to us. The gist of it was that you were looking for an army of "dog people" to send letters to the IRS, asking for an investigation into the Humane Society of the United States. How did that effort get started, and what can you tell us about its progress?

Over two years ago, I sent Wayne Pacelle a letter asking HSUS to acknowledge the fact that the Missouri Pet Breeders Association had publicly condemned substandard dog kennels in 2006. I also made a request that HSUS publicly condemn those who explicitly violate the Animal Enterprise Terrorism Act.

The idea for this campaign originated when I got non-responsive letters back from Pacelle, which confirmed in my mind that neither he nor HSUS would ever tell “the truth, the whole truth, and nothing but the truth” about the overwhelming majority of responsible dog breeders. HSUS would rather aggressively lobby under false pretenses for new laws at the federal and state level.

So he really motivated me to begin researching and compiling documentation that would show that HSUS is not in compliance with the IRS Tax Code (and its implementing regulations) with respect to limitations on lobbying activities by public charities. I examined HSUS's tax returns for 2004-2008 and downloaded more than 400 pages of documents from the HSUS Website. Then I prepared a 14-page summary and began distributing it to breeders in different states with a request that they send letters to the IRS Tax Fraud Office in Fresno, CA and urge others to do the same.

The letter-writing campaign spread like wildfire. It has now generated over 4,000 letters from all 50 States. These letters request that the IRS audit the lobbying activities of HSUS. Significantly, over 1,200 of those letters were sent by certified mail. This effort also generated e-mails to members of Congress, and I have received confirmation that at least four Congressmen have contacted the IRS, asking that it address the concerns of their respective constituents.

Yep—There's nothing like the guys who approve your budget giving you a marching order. But what about all this lobbying that HSUS does? We know you have an extensive dossier of compelling information, but can you boil it down to a few sentences for readers who don’t know much about lobbying laws? What exactly is HSUS doing that’s wrong?

Documents from the HSUS Website, along with incriminating admissions made on HSUS's tax returns, confirm that HSUS has been involved in more than 2,000 distinctly different lobbying activities at the federal, state and local levels during the last five tax years. This includes claiming credit for the enactment of nearly 700 Federal and State Laws. [ed.: HSUS's own Articles of Incorporation also prohibit it from trying to "influence legislation."]

Additionally, HSUS has published online biographies for its two most senior officials, claiming credit for the defeat of several members of Congress. That’s a mega-major “no-no” for a public charity.

One other glaring misrepresentation that HSUS repeatedly made on its tax returns for 2004-2007 is that none—I repeat, none—of its "volunteers" or "paid staff or management" did any lobbying whatsoever. This despite incriminating admissions and boastful claims that contradict what those HSUS tax returns say. Such egregious misrepresentations call into question the credibility of everything else HSUS says on its official filings with the government.

But it's not like HSUS is an island; there are several other groups in the mix. What do you make of that whole alphabet soup? There's HSUS, the HSLF, the HSVA, NAHEE, the Humane USA PAC, etc… How many of those are allowed to lobby? Can't HSUS just spread the accounting around so no single organization goes beyond what’s legally allowable?

The master illusionist David Copperfield would marvel at how HSUS has used all of its affiliated organizations in the last five or six years in order to create the illusion that it only does minimal lobbying.

I've researched the timing when those affiliated organizations were created. I've also considered that the Chief Operating Officer (COO) of HSUS [ed: that's Michael Markarian] is simultaneously supervising the Government Affairs Office, which is responsible for HSUS's lobbying activities of the HSUS; he's also the President of the Humane Society Legislative Fund. This is the “officially” designated lobbying arm of HSUS, and it controls the Humane USA PAC. Put this all together, and you can reach an almost irrefutable conclusion that this COO has a blatant conflict of interest. And the IRS may determine that the totality of the cumulative lobbying activities of HSUS' senior management is excessive—and under-reported.

The IRS would also quite possibly conclude that these affiliated organizations were created as part of an effort to mask the breadth, magnitude, and pervasiveness of HSUS's lobbying activities, in order to circumvent the IRS's explicit limitations on lobbying by public charities.

Here's the bottom line: The IRS has the authority and responsibility to enforce the tax code, and to determine if HSUS's books are being "cooked" through the use of multiple affiliated organizations that HSUS controls. If HSUS has nothing to hide, it should welcome an IRS audit to validate its total compliance with tax laws, and to explain (to the IRS's satisfaction, anyway) that HSUS has not exceeded the lobbying limitation threshold for a public charity.

Just between us, Frank, we don't expect them to put out a press release or throw the IRS a "welcome" party. But let's get back to that grassroots army. Now that you’ve assembled thousands of peasants with pitchforks—and we mean that as a compliment—what’s next? Are you going to keep in touch with this new network and “activate” them for other issues related to the animal rights movement?

Absolutely yes. The genie is out of the bottle, and the thousands of grassroots soldiers (so to speak) are now in a better position to tell the American public the true story about the caring breeders who are responsible for bringing so much love and joy into the homes of appreciative pet owners. This story is beginning to be told, and will continue to be told. Work is also under way to use this network to increase awareness among breeders, as well as in the FBI, about how best to document violations of the federal Animal Enterprise Terrorism Act by overzealous animal rights activists.

What happens next with your IRS efforts? How will you know if you’ve had an impact? Are people inside the Treasury Department talking to you, or is all of this communication pretty much a one-way street?

One IRS representative has told me that if the IRS were to investigate allegations about HSUS, such an investigation could take more than a year—and that the IRS would never discuss details of any ongoing investigation.

And yes, I do believe the stage is being set for such a senior Treasury official to ask that question in the next few months.

You lawyers are always talking in code. (We guess it's one of those "need to know" things.) So what has this whole effort taught you about grassroots organizing? Did any single tactic work far better (or far worse) than you expected?

Here are some of the lessons I've taken away from this experience:

1. The first two words that immediately come to my mind are these: "Numbers matter."

2. A grassroots effort must be well thought out and planned before it's launched.

3. Never underestimate the “power of one,” which has a greater multiplier effect than I thought possible. Once this campaign began, grassroots members began using their own networks to spread the word and recruit new members, who in turn recruited still more members. (This is why HSUS has been so successful in its own grassroots lobbying efforts.)

4. The best way to generate a "critical mass" of grassroots members is through the Internet.

5. Develop and polish a message that's easy to understand and follow, so others will not just think and say "Right on," but also actually send letters.

6. Establish realistic goals.  Mine were for at least one person in every U.S. state to write the IRS, for the IRS to receive several thousand letters, and for at least 1,000 of those letters to be sent by certified mail for added impact. We met or exceeded all these goals.

7. Perhaps most importantly, never underestimate the importance of “follow-up, follow-up, and follow-up” to sustain your momentum.

Thanks for being a HumaneWatcher, Frank. We all wish you well.