"The Immediate Relief of Suffering" - HumaneWatch 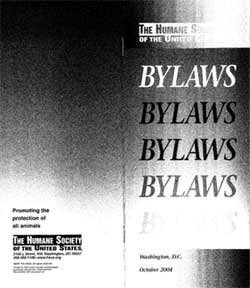 In addition to HSUS's Articles of Incorporation, we've managed (with some help) to get our hands on a copy of HSUS's official bylaws.

This copy was published in October 2004. It may not be the current version, but we haven't seen anything more recent than this document. (If you have, please let us know about it.)

We've read through this a few times, and one phrase caught our eye: "The Immediate Relief of Suffering."

Let's talk about that important language. This is a long discussion, so please bear with us.

All available funds of the Society shall be used for the immediate relief of suffering and the vigorous prosecution of humane education except as otherwise provided by law or the specific terms of a gift or mandate of a donor. (emphasis added)

See page 9 of the PDF if you want to read more. For what it's worth, we have a very faded copy of HSUS's earlier bylaws, dated 1994. And this same language is in there as well.

Now we have no way of knowing how many of HSUS's donors have specifically directed the group to spend their money on, say, long-term undercover investigations of livestock ranchers and meatpackers. But if HSUS ever got such a gift, we have a feeling they'd publicize the living heck out of it. C'mon, Yellow Tail wine gave 'em $100,000 and they got their own web page to boast about how great they were.

We're thinking specifically about HSUS's undercover investigation of the Hallmark/Westland meatpacking plant in San Bernardino County, California. An HSUS operative started secretly rolling video there in October 2007. But it wasn't until January 30, 2008 that HSUS published selected video clips online and gave the story to The Washington Post, signaling its first attempt to actually intervene and stop the abuse of animals that was going on in that facility.

What in the name of Cleveland Amory was "immediate" about that? Seriously.

Lots of people (including the Center for Consumer Freedom) asked the obvious question: Why did HSUS sit on that video for three months while the systematic abuse of cows was going on at Hallmark/Westland? Shouldn't the group have told its undercover mole to "immediately" complain to the plant manager (if not the U.S. Department of Agriculture) the very day after he first witnessed a forklift pushing a "downer" cow to slaughter?

In sworn testimony before Congress on February 26, 2008, HSUS’s Dr. Michael Greger blamed the delay (at least three times) on the San Bernardino County District Attorney’s office. Greger claimed that “they told us to wait on any kind of public release of this information.”

Two days later, we called the DA’s office. When Assistant District Attorney Dennis Christy got on the line, we read him Greger's quote. This is what Christy said:

I can say unequivocally that we never suggested [that] in any way – in fact, we encouraged the HSUS to cooperate with, provide information to the U.S. Department of Agriculture … [and] we had some difficulty in preparing criminal charges, because of delays in setting up any interview with the Humane Society investigator at which USDA officers would be present.

Christy then explained to me that he had asked HSUS's lawyers to let their investigator sit down with the DA's office and someone from USDA, so all the facts could be laid out on the table. And HSUS flatly refused, as long as the USDA was also invited.

Here's our opinion of what we think happened. Feel free to quibble or flatly disagree.

What was that about "the immediate relief of suffering" again?

The original founders of HSUS understood that it was important to intervene "immediately" when you see something horrible going on. But the group's current leadership appears more interested in raising money and building political power.

Why don't they just go ahead and rewrite Article IX? Here's a new opening:

All available funds of the Society shall be used for self-promoting, propagandizing, pension funds, and national advertising that is suggestive of genuine pet-sheltering organizations. Actual suffering may be dealt with as fundraising goals and desired political outcomes dictate.

Too much? You tell us.