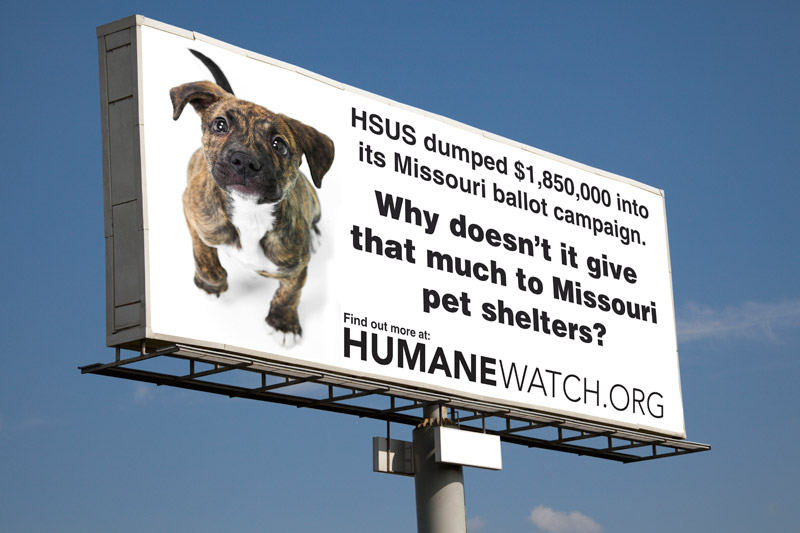 With news that Missouri’s legislature and Governor have passed and enacted a “Prop B” compromise, it’s clear that the Humane Society of the United States and its East Coast riches failed to accomplish much in the Show Me State.

Even with a huge financial advantage, Prop B squeaked into the “win” column by a narrow 3-point margin. And ironically, HSUS’s heavy-handed approach mobilized grassroots agriculture supporters across the state.

Just a few months later, a bipartisan coalition has repealed significant parts of Prop B. Everyone from farming organizations to the Missouri Humane Society got behind the compromise to promote a “Missouri solution.” HSUS got left out in the cold.

So, what now? HSUS is doubling down.

HSUS is pushing yet another Missouri ballot campaign, an attempt to modify the legislature’s power so it will be harder for lawmakers to amend ballot initiatives in the future. This new HSUS campaign (HSUS owns the website domain, and a “Prop B” lobbyist is the campaign’s treasurer) could easily burn through another few million dollars from HSUS’s unwitting donors. And if it succeeds, HSUS will almost certainly be back for yet another expensive bite at the “Prop B” apple.

We imagine the Missouri economy will be grateful for any dollars HSUS wants to throw across the Mississippi river. But we also think Missouri’s hands-on dog and cat shelters (remember them?) would appreciate those funds even more.

It’s hard to predict the future, of course, but this much is clear about the present: HSUS pumped a lot of money into Missouri and didn’t get much out of the deal. And we probably won’t read about it in a future HSUS fundraising letter.