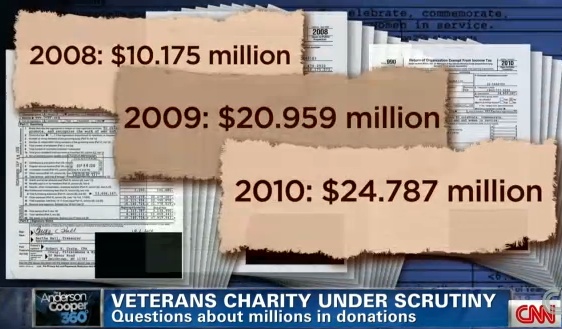 A hard-hitting CNN report this week exposes a veterans charity called Disabled Veterans National Foundation for, well, not doing all that much for veterans. According to CNN, DVNF has raised $55.9 million since 2007—yet spent $61 million from 2008 to 2010 with a for-profit fundraising firm called Quadriga Art and one of its subsidiaries. It’s no surprise that DVNF gets an “F” grade from the American Institute of Philanthropy.

And what kind of aid did DVNF provide? Apparently the charity sent useless gifts of 2,600 bags of cough drops and 2,200 little bottles of sanitizer, and 11,520 bags of coconut M&M's to a veterans center in Alabama. Talk about making a difference.

That’s certainly a questionable arrangement—and probably one not made clear to DVNF’s presumably many donors. Apparently, Quadriga owns two subsidiaries that spun off from a different veterans charity called Paralyzed Veterans of America—another F-rated charity. (PVA also has had questionable spending issues.) And it turns out that Quadriga also has provided services to the F-rated charity SPCA International—with 99 percent of SPCAI’s debt owed to Quadriga as of 2010.

And guess who another Quadriga client is? That’s right: The Humane Society of the United States. According to HSUS’s tax returns, it paid Quadriga $8.2 million in 2009 and $9.6 million in 2010.

Of course, considering HSUS’s fundraising track record, we can’t say we’re surprised they’ve shacked up with this firm. We don’t know for sure, but it wouldn’t surprise us if Quadriga is behind a lot of those HSUS doodads, tchotchkes, and other junk HSUS gifts. If HSUS keeps this up, maybe its charity grade will drop from a “D” to an “F.”

To be fair—what does Quadriga have to offer in rebuttal? Why, threat of legal action. From CNN:

When asked about Quadriga's relationship with DVNF, spokesman Ron Torossian told CNN in an e-mail that the company is privately owned and "we do not discuss specific client relationships." But according to IRS filings, Quadriga has been paid for direct-mail services by DVNF since the charity was founded in 2007.

Torossian did say in his e-mail, "At times, Quadriga chooses to invest money in partnerships with non-profit organizations. Sometimes it is a successful business venture, while others it is not."

When CNN asked whether that included the Disabled Veterans National Foundation, he said "your facts remain woefully inadequate," but he declined to elaborate in a later e-mail exchange. He also threatened to sue CNN on behalf of Quadriga.

Starting to get the picture? The only real question is what’s worse: Using veterans to scam Americans, or using cats and dogs?

Millions of doggie dollars that go to the Humane Society of the United States have wound up with Quadriga. This is just one more reason people who want to help shelter pets should give directly to their local shelters, and not to HSUS.