Thursday morning on the HumaneWatch Facebook page, Nebraska grass-fed beef producer Kevin Fulton did something curious. Fulton, the host of tonight’s Humane Society of the United States “town hall” meeting in Lincoln, assured all 194,000 HumaneWatch Facebook fans that “everyone here is invited" to the Nebraska event. "[Y]ou don’t have to be from Nebraska.”

Did he lie? Was he overruled by Wayne Pacelle? We can’t be sure. But not quite everyone was welcome. 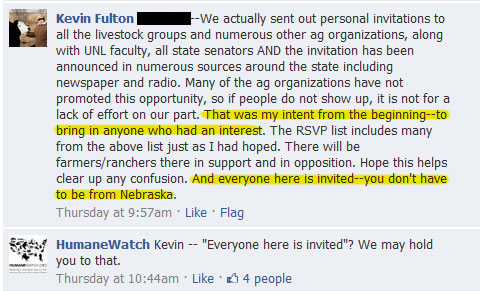 On Thursday, HumaneWatch editor David Martosko quickly took Fulton up on his offer and RSVPed for the HSUS meeting. HSUS sent a confirmation e-mail too (click to enlarge). 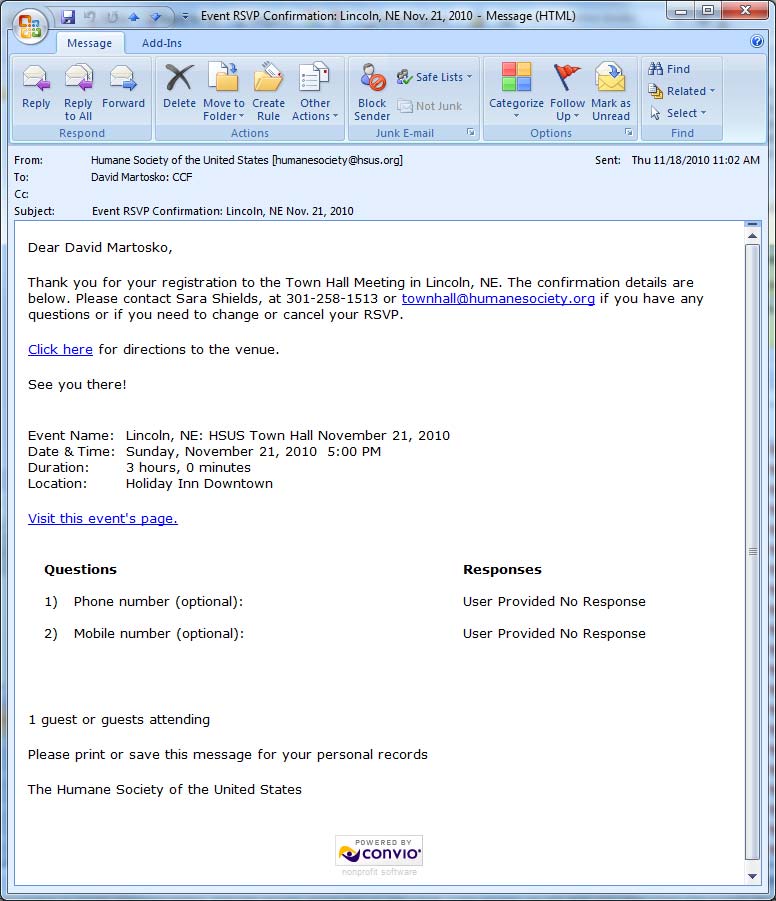 Martosko showed up personally in Lincoln, Nebraska yesterday with some trepidation. He had never been to an HSUS-sponsored event before, and HumaneWatch isn't exactly on Pacelle's Christmas card list. But we do have a billboard up just a few blocks from the meeting site. And this could be a great opportunity to meet Wayne Pacelle face-to-face. Or at least ask him a few thoughtful questions that have our readers buzzing.

So much for that idea.

Greeting Martosko at the ballroom door were three burly security guards—off-duty airport policemen armed with semiautomatic weapons and an arms-crossed, “None shall pass” posture. He had his RSVP confirmation e-mail from HSUS in hand. It didn’t matter.

Fulton himself appeared at the door moments later to smirk: “Ain’t no way you’re getting in here.” And the door slammed behind him.

Fulton was right, of course. There was no way anyone from HumaneWatch was getting in. We’ve put serious pressure on HSUS to tell the truth about its goals and its history, so keeping us out in the cold was Wayne Pacelle's way of controlling the proceedings and dodging tough questions. It also gave him free rein to lash out at HumaneWatch (and our billboard) at least a half-dozen times during his presentation.

The hotel's Assistant Manager confirmed that HSUS had said anyone with a valid RSVP would be allowed to attend. But he added: “Later, today, we heard that there was a short list—5 or 6 people—who weren’t getting in no matter what. So far, you’re the only one of those who has shown up.”

So be it. But thanks to modern technology, we got regular text-messages and e-mails from inside. (Thanks to those of you who helped.)

Notes From the Non-Banned

We know that Wayne Pacelle commented on our Lincoln billboard, claiming that we’re giving out “false information,” and that HSUS has never claimed to fund pet shelters. Memo for Wayne: When 71 percent of the public thinks that’s what you do, and less than 1 percent of your money is actually doing it, there’s something horribly wrong.

By the way, Pacelle doesn’t know (or is ignoring) his own group’s history. HSUS used to have a 60-40 fundraising split with pet shelters in many states. HSUS kept the 40% share. Today it diverts roughly 99% to other animal-rights campaigns.

Pacelle also criticized the veterinary profession, claiming that they too often represent “industry”—which is a little like saying you shouldn’t trust doctors because some of their prescription pads have drug company logos on them.

He defended Californians’ decision to pass “Proposition 2” in 2008, without addressing the tremendous cost that legislation will add to the typical family’s grocery bill. No mention of the cost of pork in Sweden, or the price of eggs in Germany and Austria, all nations that have adopted HSUS-favored approaches.

Pacelle decried the loss of the “family farm”—as though any of HSUS's vegan leaders are more likely to eat or endorse free-range pork or cage-free eggs. (We all know they haven't.)

According to three meeting-goers we spoke with, Pacelle mostly preached to the choir. One farmer on his way out described the scene as something “like the State of the Union Address, where only one side of the room claps at the applause lines.” Another chimed in: "If this guy is in charge of how we farm and who gets to do what, I may as well pack it in."

In the question-and-answer period, Pacelle largely read questions from pre-written index cards, according to the same eyewitnesses, leaving little time for impromptu questions.

At least 40 people inside the meeting had copies of the five questions we suggested yesterday. Not one was permitted to ask them. Several said later that their attempts to ask questions were ignored.

Meeting the people of Lincoln was well worth the effort. With the exception of the HSUS personnel and their newest spokes-rancher, everyone was the perfect picture of politeness and warmth. (Even the armed guards were friendly while they did their job.)

He also followed Wayne Pacelle and Paul Shapiro as they snuck out of the hotel through a side entrance: “Would you like to explain why you excluded HumaneWatch from your meeting with armed guards?” Pacelle had no answer. (None that we can print, anyway.)

Move Over Michael Vick (Wayne Has a New BFF)

Afterward, our editor shared a discussion with a group of University of Nebraska grad students in animal science and veterinary medicine. Before long, the topic turned to Kevin Fulton and Wayne Pacelle, whose friendship was plain throughout the evening.

One animal science Masters Degree candidate had this to say: “I don’t have a problem with the grass-fed beef production that Kevin Fulton is pushing. I just have a problem when he attacks everything else.

“When Fulton characterizes conventional feedlots as ‘concentration camps,’ it shows his ignorance—and his intentions.”

Reached for a response on Sunday, Fulton said "I'd really rather not. Have a nice flight back to DC!"

Second-year veterinary student Jake Geis was equally direct about Wayne Pacelle: “I take offense at Pacelle’s statements that veterinarians who work with livestock are in the pockets of ‘industry’. We’ve devoted our lives to the betterment of these animals. We’re in this business because we love them.

“I think he’s lashing out at veterinarians because we’re calling his bluff. His suggestion that he knows more about animal welfare than a vet shows his agenda.”

Nebraska farmer Travis Dunekacke saved his disappointment for the fact that barely one-third of the audience consisted of ranchers, pork producers, and others in agriculture.

“The turnout of agriculture people that you would consider opposed to HSUS’s viewpoints was very poor,” he said. “Why not show up and hear the message, even if you disagree with it?”

Dunekacke acknowledged that Wayne Pacelle and HSUS have very little credibility with most Americans in animal agriculture, and it would be hard to convince them they’d hear anything new from him.

“I understand that, but they still should come. This is all about politics, and politics starts with education.”

On the other hand, the no-shows may have gotten the better end of the deal. Near the two-hour mark, two women from the agriculture school at the University of Nebraska emerged from the meeting room, heads shaking and eyes rolling.

Asked what Pacelle was up to inside, one replied without missing a beat: “Avoidance. He’s dancing around questions, not answering them, changing the subject. We had enough.”

Her friend added: “We’re going out for prime rib.”