They Have No Shame. - HumaneWatch 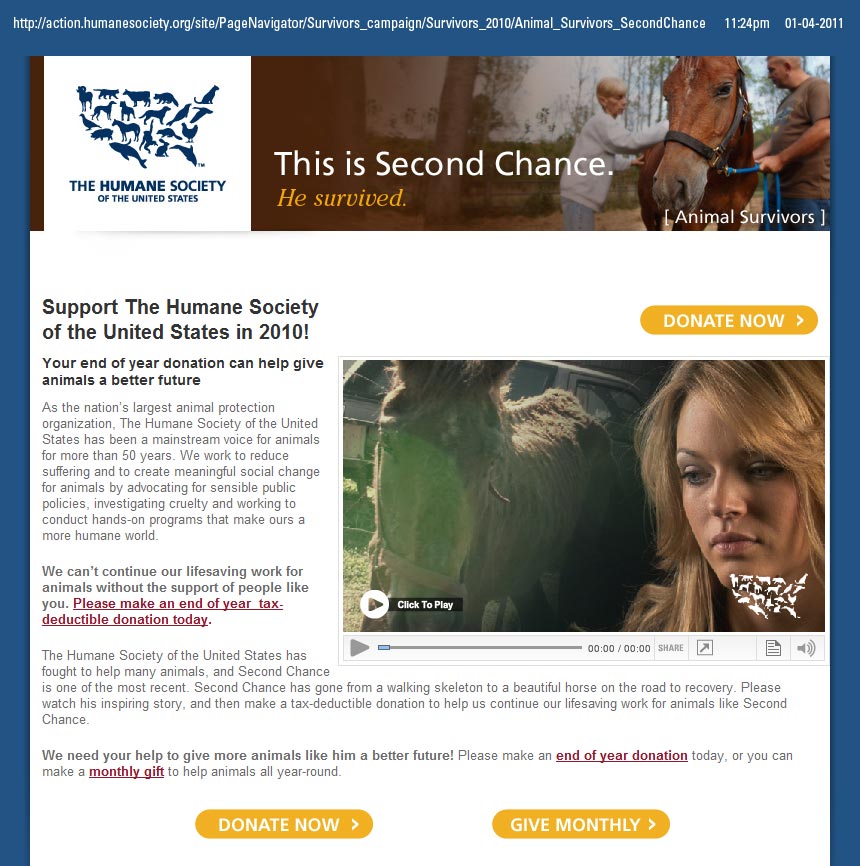 Last week we told you about a Humane Society of the United States fundraising vehicle that the group called an “Animal Survivor” story—the tale of a horse that, well … didn’t actually survive.

Days after the horse named Second Chance died, HSUS was blithely raising money without telling the public the truth.

Shortly after we exposed this dishonesty, HSUS began quietly altering its online fundraising pitches to reflect reality. We thought that would be the end of it.

But as of last night, HSUS was still raising money on at least one web page with a rather incomplete story of Second Chance.

“This is Second Chance,” the page’s header intones. “He survived.”

“Second Chance wouldn’t have made it without you,” adds HSUS West Virginia Director (and former beauty queen) Summer Wyatt in the accompanying video.

We fully expect HSUS to quickly cover its tracks again, but you can click on the image above for a time-and-date-stamped screen capture from just before midnight on the evening of January 4.

As of this morning, HSUS president Wayne Pacelle has also not updated his December 20 blog article. In that piece, Pacelle's ghost-writer claimed that Second Chance “grazes contentedly in the pastures of his new loving home, back to a healthy weight and having regained his strength.”

We’ve resisted the temptation thus far to talk about HSUS “beating a dead horse,” but this is getting ridiculous.