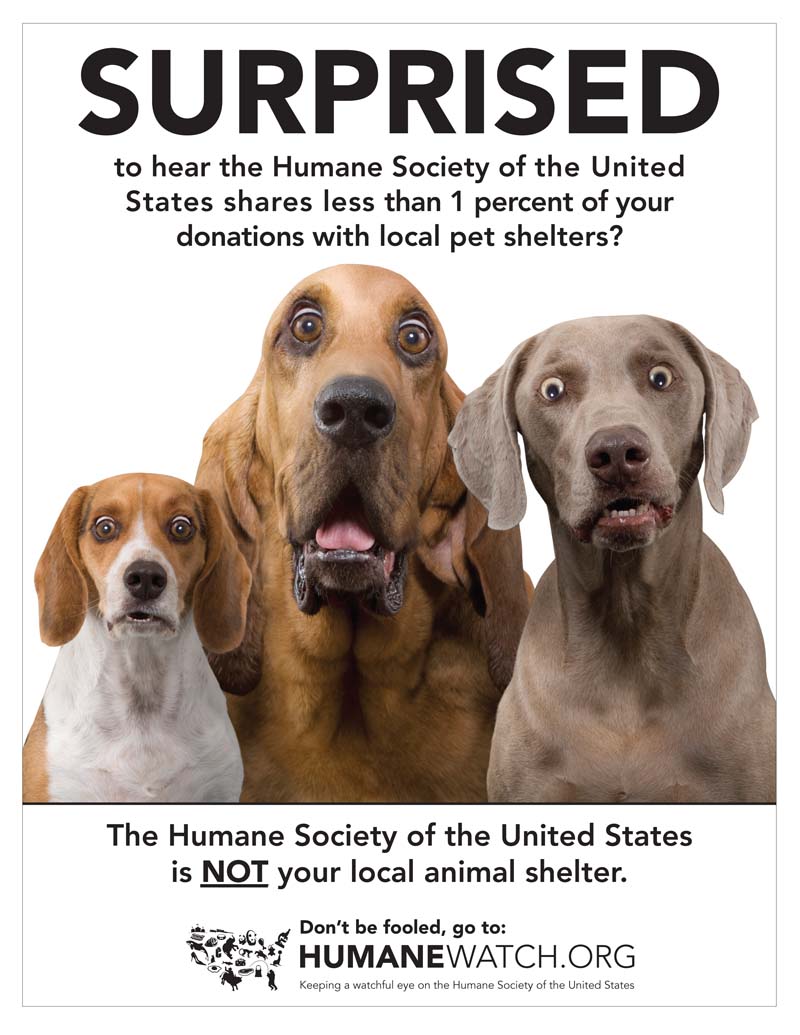 This morning's issue of Variety, the unofficial bible of Hollywood, includes a full-page HumaneWatch ad. Why? Because there are over 100 U.S. celebrities who publicly embrace the Humane Society of the United States. And it's high time their agents and publicists became aware that there just might be a down-side in continuing that relationship. Just maybe.

HSUS has a full-time "Hollywood Office" (formerly called The Ark Trust) which is dedicated solely to collecting endorsements and cultivating star power. We think it will be fascinating to put my ear to the ground and see if anyone in Hollywood cares, for instance, that HSUS sends less than 1 percent of the public's donations to pet shelters while most Americans (remember them? they're the ones who buy movie tickets!) believe otherwise.

Of course, maybe they don't care. Celebrity endorsements of charities are often little more than an exercise in mutual back-scratching.

But we're planting a HumaneWatch flag in Tinseltown nonetheless. Click here to see the ad. The press release that's hitting the entertainment world this morning is after the jump.

Washington, DC – A full-page ad from the nonprofit Center for Consumer Freedom (CCF) appears in this morning’s Variety, highlighting the failure of the Humane Society of the United States (HSUS) to donate a significant amount of its members’ contributions to America’s underfunded dog and cat shelters. The ad encourages all of Tinseltown’s elite to visit HumaneWatch.org, CCF’s website devoted to analyzing the activities of HSUS.

The Humane Society of the United States has become the animal rights industry’s most powerful player, avoiding significant public scrutiny for decades. CCF believes that HSUS donors will be surprised to learn that in 2008, less than one-half of one percent of HSUS’s budget consisted of grants to the hands-on “humane societies” that deal with the thankless task of sheltering unwanted pets. A national poll conducted in February by Opinion Research Corporation found that 59 percent of Americans falsely believe HSUS “contributes most of its money to local organizations that care for dogs and cats.”

“The Humane Society of the United States raises tens of millions of dollars annually from Americans – in part by recruiting Hollywood’s A-listers to support their messaging,” said CCF Director of Research David Martosko. “Those that donate believe their money is filtered down to local pet shelters, directly improving the lives of dogs and cats. But instead, those millions of dollars support a huge staff of lawyers and lobbyists, bloated executive pension plans, exorbitant fundraising expenses, and PETA-style propaganda campaigns.”

David Martosko continued, “Hollywood can do a lot better than cozying up to HSUS. It’s time that celebrities like Carrie Underwood, Ellen DeGeneres, Wendie Malick, and Esai Morales pressure HSUS into doing the right thing. Maybe a little star power can convince the world’s richest animal rights group to be more responsible.”

The ad is available for download here. It reads:

SURPRISED to hear the Humane Society of the United States shares less than 1 percent of your donations with local pet shelters?

The Humane Society of the United States is NOT your local animal shelter.

Don’t be fooled, go to HumaneWatch.org