Too Cheap for Chimps - HumaneWatch 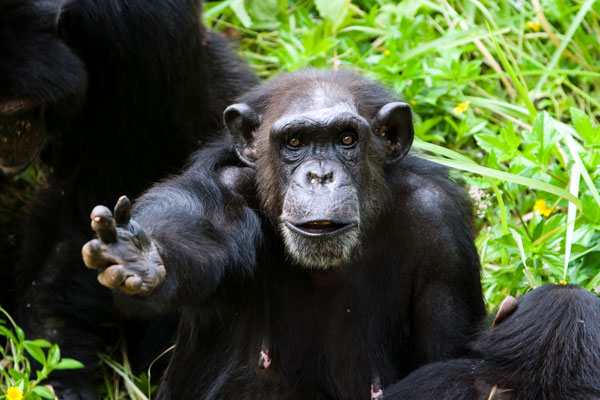 Yeah, I'm a chimpanzee, and I've got my hand out. You got a problem with that?

My name is Cheeta. I'm one of those nine chimps that used to be part of the Cognitive Evolution Group at the University of Louisiana Lafayette. The place closed down its psychological and behavioral research program in 2008, which is too bad. Lenny and I were just getting the hang of Jenga.

We've pretty much been hanging out ever since, just sponging off the university. All we do is sit around and pick bugs out of each other's coats, and watch the DVDs of Every Which Way But Loose and Tarzan. We know all the lines, but those films never get old.

Plus there's an endless supply of Cheetos, we get maid service in the cages, and Joe Savoie doesn't mind when we raid his fridge and drink all the beer.

We're hearing that the Humane Society of the United States wants the U to move all of us to this sweet swingin' primate frat house called Chimp Haven. I've seen the brochure. It's nothing but leaves, fruits, and insects in the morning, endless sex after the mid-day nap … oh! And on Fridays all us ladies go out hunting for those little howler monkeys. I'm tellin' ya, the meat just falls off the bone.

The HSUS guys have their organic vegan panties in a twist about all of this, saying we're suffering where we're at. But I dunno. It beats the heck out of climbing trees to escape the bad-ass silver back gorillas in the old country. Those hairy dudes have got teeth. Plus we have climate control in here. As long as no stupid whistleblower-wannabees decide to play hero, I could ride this gravy train for a long time.

Where was I? Oh yeah—the panhandling. Well, this Chimp Haven place has got some steep rents. They want like $2.8 million just to take the nine of us in and let us roam around. But then get this: We still have to pay another $300,000 to build our own house. What? The first $2.8 million wasn't enough for a roof over our heads? It's like the house mother thinks she's Leona Helmsley or something.

So either we're staying put, or someone's going to write one of those giant Publisher's Clearinghouse checks with the balloons and the confetti. And unless this begging gig works out, it's either going to have to be the University, or those HSUS people.

I was wondering which group had more dough, and then Lenny reminded me that he likes to hack into the intercom system at night and make it play those hilarious MP3s from the Planet of the Apes soundtrack. (No, not the remake. We're not without standards here.) So I told him he could have that banana I stashed on Monday if he figured it out.

Lenny tells me the University of Louisiana and Lafayette Foundation has $130 million in assets. But HSUS has $162 million! And it's not like they have real expenses like books, football jerseys, or that annual Homecoming Weekend screening of The Waterboy. HSUS could just cash in a few stocks and bonds, maybe cancel a couple of ads on Animal Planet, and man—we would be set.

Seriously. If HSUS wants us to move, why won't they pay for it? I mean, come on—They've got the money. But yeah, I know. These people can't even figure out which chimps they're protesting and which ones they like. And one of the vets tells me Chimp Haven asked HSUS to foot the bill last week, and they already said no. You'd think they'd want the good PR. But they're too busy wining and dining their sad little corner of Hollywood this week. No time to bother with us, well … you know: animals.

I guess it's back to nap time. I need to catch some beauty rest before I go back out on the quad to beg some more.

What's that, Lenny? They're showing King Kong in the playroom at six o'clock? Sweeeet.