Trading Up to the SPCA - HumaneWatch 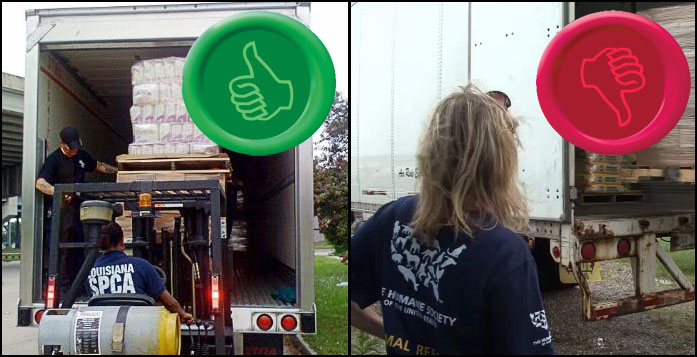 In June, Mars Petcare donated more than 12 tons of dog food to help dog and cat owners keep their pets in the midst of the Gulf oil-spill crisis. You might remember that HSUS piggy-backed along for the ride—donating less than three percent as much food through its vegetarian "Humane Choice" brand, “coordinating” the delivery, and claiming most of the credit.

But HSUS is apparently out of the donated kibble delivery business. Mars made another enormous donation today, and HSUS wasn't invited to the party. Instead, Louisiana SPCA volunteers are leading the charge to distribute the pet food in their own communities.

As it should be.

Because of sloppy news reporting (and some reality-bending HSUS self-promotion), it wasn't always clear to the general public exactly who gave what in June.

In some ways, you can’t really blame HSUS: The group wasn’t doing much to help animals in the Gulf region, so exaggerating its (minimal) role probably seemed like the familiar thing to do.

But this time around, Mars seems to have decided it would rather work with hands-on pet care people instead of incessant publicity-seekers. Or since the company's donation today included cat food, and no sensible veterinarian would recommend a feline vegetarian diet, perhaps HSUS decided to sit this one out.

Either way, the right people (actual Louisianans) are finally involved. We wish them, and all the pets displaced by the oil spill, well.