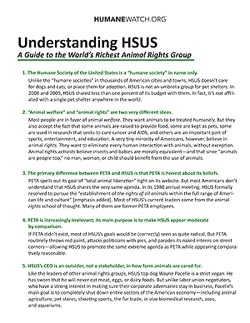 Ever since we introduced the wildly popular "Seven Things You Didn't Know About HSUS," HumaneWatchers have been asking us when we would roll out a sequel. Well … today's the day!

We're proud to release version 1 of "Understanding HSUS: A Guide to the World's Richest Animal Rights Group." This is a must-read for anyone who cares about the growing role of the animal rights movement, and the eroding role of animals, in American society. (Here's a direct link to the PDF.)

"Understanding HSUS" provides a brief look under the hood of HumaneWatch's philosophy. While "Seven Things" was a Just-the-facts-Ma'am research document, this handout should make you think. Why has HSUS become so powerful while PETA's influence has shrunk? How can you tell if an idea promotes animal rights or animal welfare? And what's HSUS's long-term goal?

All this and more awaits you in a compact format that's easy to digest and full of "Now I get it!" moments.

We're always happy to hear suggestions about future projects. If there's something you would find particularly useful to have, just let us know! In the meantime, wouldn't "Understanding HSUS" make a perfect addition to your Facebook wall? (We thought so.)