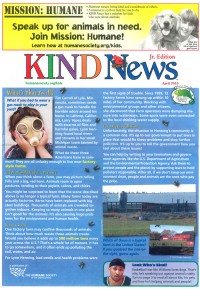 There's nothing new about animal rights groups targeting children. PETA constantly hands out gory comic books to kids titled “Your Mommy Kills Animals.” (And that's just for starters.) HSUS, with more of a soft-sell marketing style, puts out a little newsletter once each month during the school year called KIND News. This turns up in classrooms all across the country.

By our estimation, KIND News is a more insidious publication than anything PETA produces. PETA’s “comic books” don’t pass any parental smell-test, but HSUS's version of kiddie propaganda is cleverly set up to seem perfectly innocuous.

Last month's edition is a great example. The "Jr. Edition" of KIND News for April (distributed to third- and fourth-grade students) includes an article trashing livestock agriculture, in which HSUS tells its young readers to write to their Congressman, the USDA, and the EPA.

In other words, HSUS is recruiting unwitting kids to lobby for them, without parental consent or notice.

One school district in Nebraska has e-mailed its teachers, asking them to halt distribution of this HSUS publication. It's about time.

Here’s what the Director of Curriculum at Lincoln (NE) Public Schools wrote:

It has been brought to my attention that you may have teachers who are sending home a newsletter called "KIND News" published by The Humane Society of the United States. I believe that teachers may have received a sample of the newsletter and signed up to receive them to send home with their students.

The Humane Society of the United States is an animal protection organization that is a political lobbying organization. The stances that they take can be controversial and our Controversial Policy would apply if teachers are sending these home with students. The other side of the issue would need to be presented.

I can see how something that advocates for being kind to animals might not seem controversial. However, the latest edition on farms being factories is controversial and students are encouraged to write to lawmakers and government agencies. When newsletters are sent home from organizations it appears that the Lincoln Public Schools is endorsing these organizations and we cannot do that.

If teachers are teaching these issues and both sides are presented then there is a difference. If they are just sent home, then I would ask that you make teachers aware that this is a practice that should be stopped.

We're glad there's at least one school administrator out there who knows what's what. But who knows how far the reach of “KIND News” is. If you see your kids bring it home one day, a couple of phone calls might be in order.

Interesting side note: You may remember that a few years ago, two PETA employees were arrested in North Carolina for killing puppies and kittens and tossing their bodies in a North Carolina trash dumpster. Guess what showed up in the police evidence photo of the mobile death van? Yep.

We know that this blog isn't about PETA, but you just can't make this stuff up.

Maybe the KINDness didn’t quite rub off the right way. Or perhaps in the animal rights world, it's KIND to snuff out adoptable pets.

Do you suppose HSUS counts all the children who read KIND News among its supposed “11 million” members and constituents? We wonder.