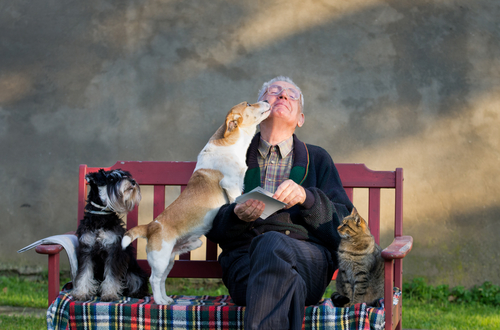 An elderly Mississippi couple just wants their pets back. But thanks to the Humane Society of the United States, they may never see their animals again.

Several months ago we reported on the story of the Sennes, an elderly Mississippi couple who have an ongoing court battle with the Humane Society of the United States.

Last year, the couple was the subject of complaints that they weren’t properly caring for some dogs on their property. The local sheriff’s department seized animals from the Sennes with the help of HSUS. The Sennes signed an agreement regarding the seizure, but specifically excluded the couple’s personal pets, which were not the subject of the complaints. And that’s where things get hairy.

The sheriff’s office and HSUS took the Sennes’ elderly dogs in addition to the other animals on the property. The Sennes are now challenging the seizure, saying it was a violation of their rights. And a court has agreed, with a judge ruling last month that the seizure of the Sennes’ pets was unconstitutional.

According to court records, it had been clearly laid out in both HSUS’s surrender form and promised by a HSUS representative that the organization would not remove the Sennes’ dogs from their house.

The case is now heading toward trial. But even if the Sennes win, it’s unclear if they’ll even get their dogs back courtesy of a sleazy move by HSUS.

Why? Because HSUS doesn’t even have the dogs any longer, and it’s not clear that HSUS knows where the dogs are.

According to an affidavit signed by Sara Varsa, a vice president at HSUS, the animals were shipped from Mississippi to a location somewhere around Washington, D.C. The affidavit fails to say if specifically the five elderly dogs survived the trip to D.C. or if they are even presently alive.

The court ripped into the lack of transparency, noting, “It seems somewhat curious that Ms. Varsa fails to state what ‘animal rescue organization’ the five dogs were transferred to,” and that “It would seem reasonable that the ‘Vice President, Animal Rescue Team’ of The HSUS with personal knowledge of the facts of this case should know and have records of which organization the five dogs were transferred to, the day the transfer occurred, and the terms and conditions of the transfer.“

As expected, HSUS is not happy with the court’s ruling and has asked the Mississippi Supreme Court to hear the case. HSUS argues that because it didn’t have the dogs at the time of the lawsuit, neither the sheriff’s department nor HSUS should be liable.

This claim is made even though the agreement between the sheriff’s department and HSUS stipulated that HSUS could produce the animals taken in the raid if needed.

Think about that for a second: HSUS is trying to argue that it is not its responsibility to keep track of or monitor what happens to animals it seizes. Even if it has an agreement to keep custody of the animals and produce them.

Whatever happened to due process and innocent until proven guilty? Under this line of argument, it would seem that a person who is merely accused of something could have their animals seized and whisked away across the country before being found guilty of anything.

That’s something that should concern any pet-owning American. And hopefully the court will recognize it.