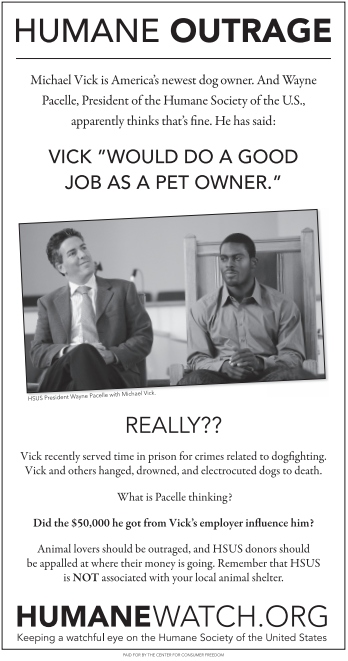 If you're new to HumaneWatch–welcome! Use the navigation bar above to learn the facts about the Humane Society of the United States (HSUS), which is not your local animal shelter (many people don't know this).

The ad questions the words of Humane Society of the United States CEO Wayne Pacelle, who said Vick "would do a good job as a pet owner" in 2010. Recently, Vick revealed that he has gotten a dog, and animal welfare advocates are outraged, with the memory of Vick's outrageous and cruel behavior seared in their minds.

Why would Pacelle say such a thing? Did the $50,000 his organization received from Vick's employer help sway his opinion?