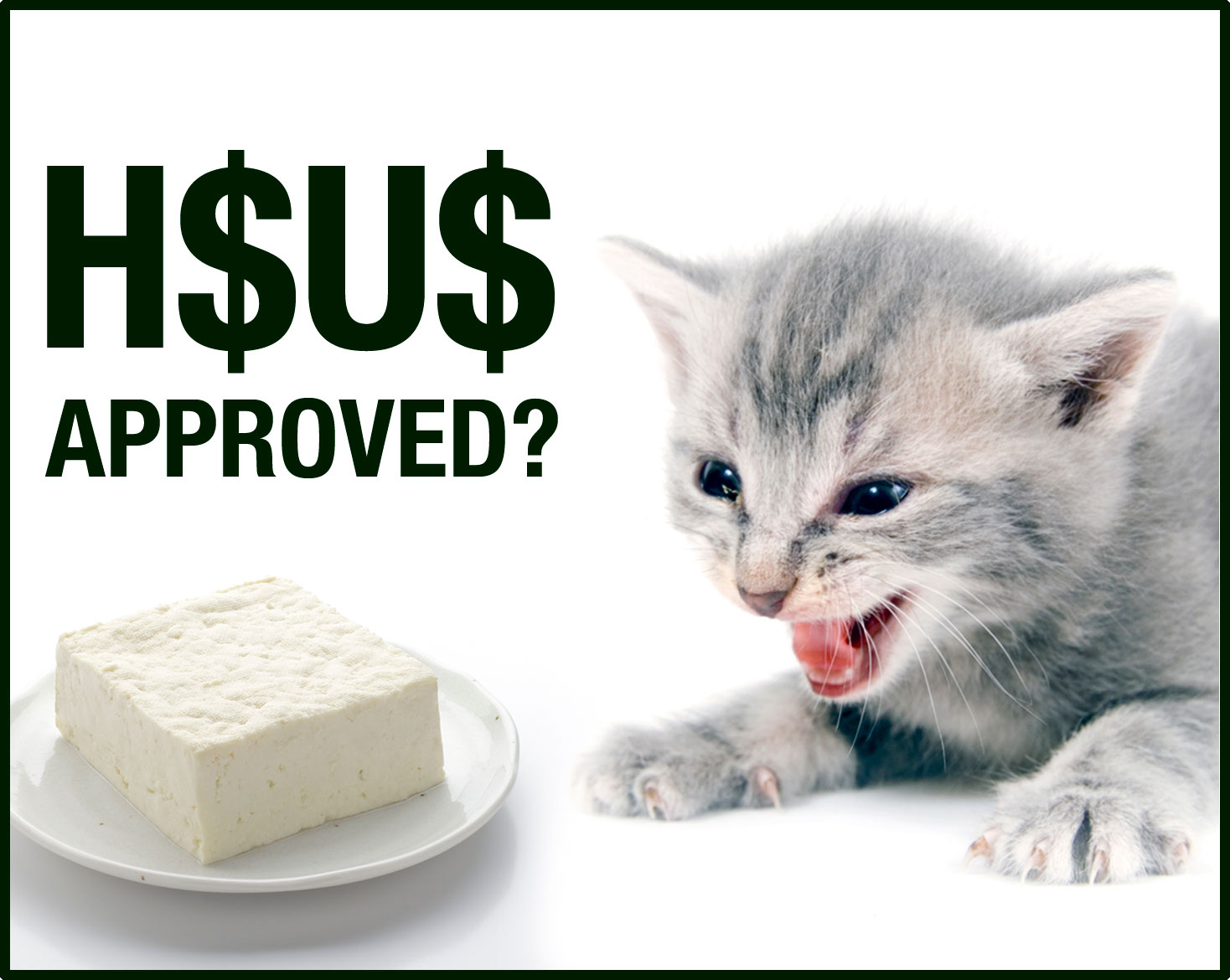 Last year HSUS unveiled a brand of vegetarian dog food called “Humane Choice,” to much derision. It’s one thing for HSUS to promote meat-free or vegan diets to people, but asking people to force it on Rover is another matter. The idea of meat-free dogs also faced a bit of professional skepticism.

On Tuesday the Toronto Sun reported that the notorious wingnuts at PETA—an HSUS ally in the push for animal rights—are now pushing for cats to go vegan. That’s certainly odd—cats are obligate carnivores, after all.

The Sun dialed up HSUS for its take on PETA’s attempts to get cats to “go veg.” Fortunately, an HSUS representative panned the idea, telling the paper that “I hope this is not a trend, or we will be seeing a lot of sick cats. It is not appropriate to feed cats a vegan diet.” (This is one of the few times we’ve seen HSUS and PETA disagree on something.)

It’s refreshing to see HSUS take a sane approach. But (and there always seems to be a “but” with HSUS), an HSUS representative appeared to take a different line regarding vegan cats just a few weeks ago at HSUS’s annual “Taking Action for Animals” conference.

Here’s HSUS’s “Corporate Outreach Manager” responding during an audience Q&A at a session on farm-animal issues:

There is a new vegetarian cat food on the market that’s available from websites like Vegan Essentials, it’s called Ami, and my cats actually prefer that when we give them the meat kibble and the vegetarian or vegan kibble.

OK—that’s not an explicit endorsement of getting cats to go vegan. But it sure sounds implicit to us—at least, it's definitely not in tune with the "not appropriate" line from the HSUS spokeswoman quoted in the Sun. Not to mention that this HSUS staffer gives out a specific brand for vegan cat food (as well as dog food).

She does hedge her statement by saying that “I would certainly also do a lot of reading…and probably work closely with your veterinarian.” Helpfully, the Toronto Sun asked a veterinarian for his take on vegan cats. And it just so happens that the paper asked former HSUS Vice President Michael W. Fox, himself an outspoken animal rights activist.

Fox blasted the idea of putting cats on a vegan diet regimen, saying: “To impose some vegetarian or vegan ideology on one's cat is to go against the nature of cats and their right to be fed a biologically-appropriate diet.” (It sounds like some folks at HSUS and PETA didn’t get the memo.)

People are certainly free to make their own choices about what diet to follow based on their personal ethics. But if animal rights activists put their ideology in the doggie dish, the pets—excuse us, “companion animals”—could be the ones that suffer.