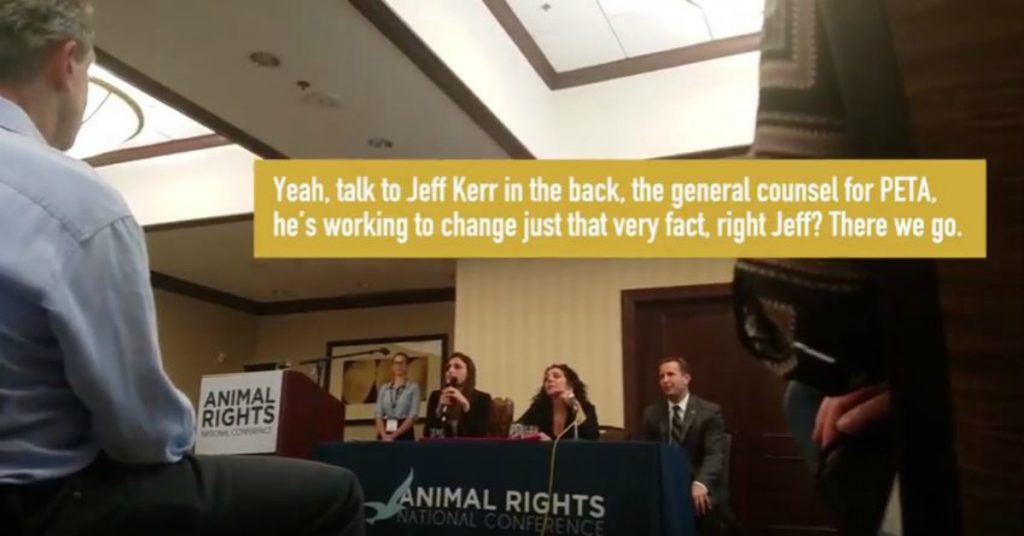 Earlier this month, we attended the Animal Rights 2017 Conference held in Alexandria, VA. This is an event for extremists; one of the main speakers was a convicted felon who urged–while receiving much applause–people to be even more radical. And though they label themselves as an “animal welfare” organization, the Humane Society of the United States (HSUS) was right at home sitting on panels and giving speeches alongside these often violent and more transparent “animal liberation” organizations and individuals.

It’s at places like this that you see HSUS take off its mask and show its true colors. In a Q&A after his second panel, Paul Shapiro, vice president of policy at HSUS, was asked if the highly trained animal athletes of the Ringling Bros. circus would be continuing their careers or retiring to a sanctuary. His response was telling:

Did you hear that at the end? Shapiro first said that he wanted the animals to go to a sanctuary, but acknowledged there was no legal reason that should be the case. Then, he singled out the general counsel for PETA, Jeff Kerr, and his efforts to acquire legal personhood for animals, as a way to force future animals to sanctuaries.

Kerr has led PETA’s effort to get Naruto, an Indonesian monkey that went viral after it allegedly took a selfie with photographer David Slater’s camera. PETA has been asserting in federal court that Naruto should own the copyright, which by default would make it a legal person.

This is not a minor detail. Giving legal “personhood” to animals would allow PETA, HSUS, and other zealots to sue “on behalf of” these animals in court. Imagine a day when PETA/HSUS can sue old MacDonald and use his dairy cows as “clients.” It sounds nuts–and it is–but this is a fundamental change to the legal code that the animal activists want. It would allow them to easily sue any zoo, aquarium, farmer, rancher, or perhaps even pet owner they wanted to target.

That’s what Paul Shapiro, and HSUS, wants – animals to have “rights” like people. If he has his way, we might one day have a literal kangaroo court.
Essential Reading
Email Signup